A Thai Airways International Boeing 747-400 was involved in a "partial" runway excursion at Bangkok Suvarnabhumi International airport on the evening of 8 October.

In a statement, the carrier says the 747-400, registered HS-TGF, was landing at the airport under inclement weather conditions at 22.48 local time.

"There was heavy rain upon landing at Suvarnabhumi Airport, and the aircraft experienced a partial excursion from the runway, whereby the aircraft came to a complete stop," explains Thai.

Images seen on social media indicate that the aircraft stopped at a grassy patch, next to what appears to be a taxiway. The left wing may have suffered some damage, and a white object, apparently from the jet, was visible on the grass near the aircraft.

Flight tracking sites suggest that the 747 landed at runway 19R. The aircraft was operating TG679 from Guangzhou. 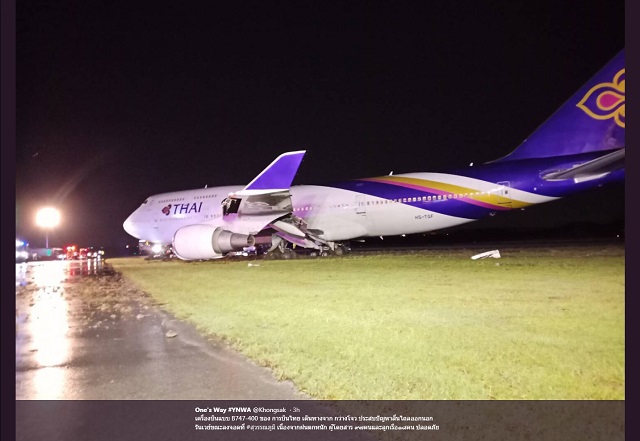 There were no injuries to the 97 passengers and 18 crew on board.

"Thai is coordinating with functions concerned to investigate the cause of this incident," adds the airline.

Flight Fleets Analyzer shows that the 747-400 (MSN 33770), powered by General Electric CF6-80C2B1F engines, has been in service with Thai Airways since its delivery in October 2003.