One of Utair Group’s freighter aircraft, an Antonov An-74 TK-100, has been substantially damaged in an accident at Gao in eastern Mali.

The United Nations Multidimensional Integrated Stabilisation Mission in Mali – known as MINUSMA – says the aircraft was landing at Gao after arriving from the capital, Bamako, at around 10:15 on 3 August.

It suffered “extensive damage” during the accident, the organisation adds. Eleven occupants – seven crew members and four UN personnel – were on board.

One of the crew members was seriously injured. Police and MINUSMA teams were sent to the scene of the accident.

“An investigation will be ordered as soon as possible to determine the cause of this incident,” says the organisation.

Images from the scene show the aircraft (RA-74044), in UN livery, came to rest in muddy, waterlogged ground on its fuselage underside with its landing-gear collapsed and its nose section badly damaged.

“The wounded were immediately evacuated to the medical [facilities],” says MINUSMA.

Cirium’s fleets database lists the aircraft involved as a 1994 airframe delivered originally to RDS-Avia and subsequently transferred to Gazpromavia and then Utair Cargo in 2012.

Meteorological data for Gao around the time of the accident indicate the presence of thunderstorm activity in the vicinity and gusting winds. 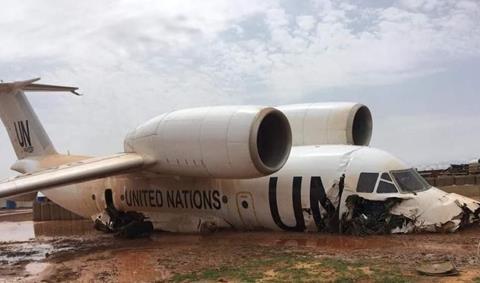