The structure consists of a series of roughly parallel panels – approximately 9m (30ft) long and 4.5m tall – which have been installed in the approach area of runway 16, close to the instrument landing system's localiser antenna.

While wake vortices at altitude tend to quickly descend, drift away and dissipate, they can hover for "some time" near the ground, DLR says.

"The very first evaluations of the new measurements in Vienna show that the wake vortices near the [panels] decay noticeably faster," states Frank Holzapfel of DLR's Institute of Atmospheric Physics.

Medium-sized aircraft – the category covers types with a maximum certificated take-off weight between 7t (15,400lb) and 136t – are mandated to maintain a separation of at least 5nm (9km) to preceding heavy aircraft under ICAO regulations.

Aircraft in the "Heavy" category have a maximum take-off weight higher than 136t.

However, the Airbus A380 is categorised "Super Heavy" and requires higher separation minima. 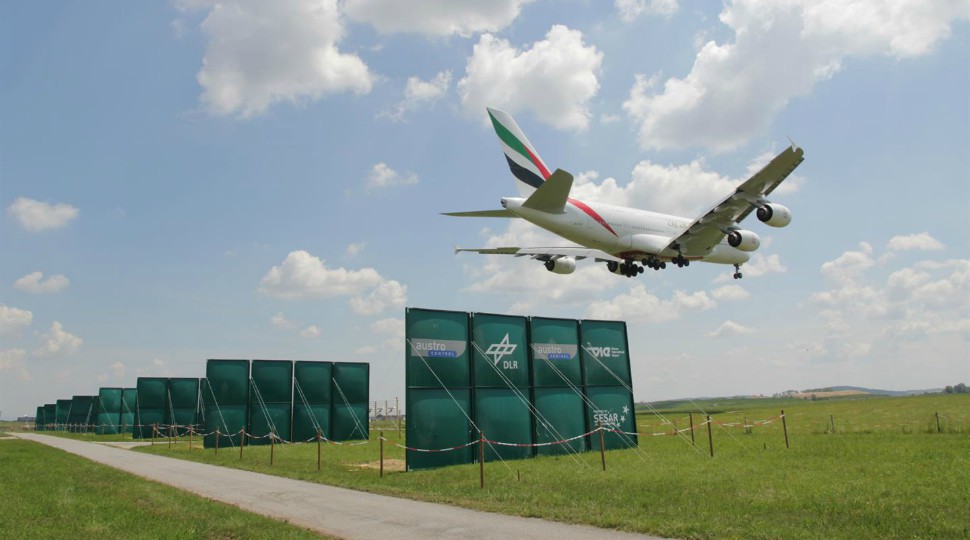 The aspiration is that aircraft will be able to land with reduced separation in future and that existing airports could be more used more effectively – without additional runways.

Austro Control air traffic management director Christian Kern says: "Initial results are very encouraging, and if the effectiveness of the [panel] lines is fully confirmed… they will be able to provide increased safety and capacity at all airports in the future."

DLR previously tested the principle of panel lines in water tow tanks, flow simulations and through a trial at the centre's Oberpfaffenhofen site near Munich.

The test in Vienna is scheduled to run until September. But DLR says that work is under way with its partners to design and install a permanent structure by 2021.

In addition to Austro Control, DLR and Vienna airport, the project includes Leonardo and RPG-Radiometer Physics as surveillance equipment suppliers to monitor and measure the spread of wake vortices.

The project is part-funded by the EU under the Single European Sky and Horizon 2020 research programmes.