Swedish-UK freight specialist West Atlantic has confirmed that one of its Boeing 737-400 cargo aircraft was involved in a landing incident at Exeter early on 19 January.

The aircraft, MSN25114, had been arriving at Exeter shortly before 02:40 following a short domestic service from East Midlands.

“The crew are safe and there is no report on injuries,” says Jordahn. “Further investigation is ongoing with the authorities.”

Circumstances of the event have yet to become clear but images circulating on social media, purporting to show the aircraft, indicate substantial damage inflicted on the fuselage, possibly by forces from the main landing-gear.

The UK Air Accidents Investigation Branch says it sent a team to Exeter on 19 January to begin investigating the incident, and is continuing to gather evidence on site.

Meteorological data for Exeter at the time of the arrival, on runway 26, indicates light rain.

Cirium fleet data lists the aircraft as having operated for Russian carrier Donavia before being acquired by Vx Capital Partners and converted to a freighter in 2016. 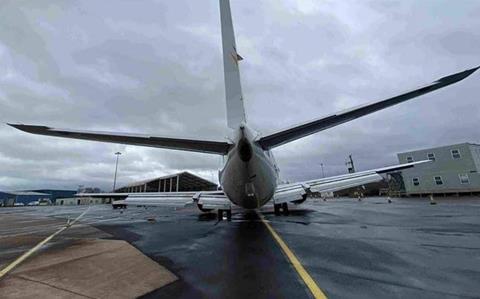