Corrected: A previous version of this story incorrectly stated that the Gripen E has yet to make its maiden flight. The Gripen E first flew in June 2017.

The Saab JAS-39 C/D Gripen fighter is appearing for the first time at the Singapore air show.

The two aircraft are operated by the Royal Thai Air Force, and will appear both on the static line and aerial display.

Saab has said that it is in early dialogue with Thailand to update its Gripen C/D fleet with the type’s latest MS20-standard software, which entered operational use in Sweden last year. 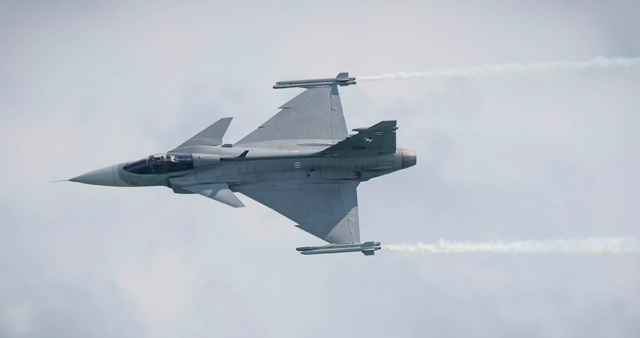 Meanwhile, the new Gripen E made its maiden flight in June 2017 has been conducting test flights ever since. The Swedish firm is particularly keen to compete for India's planned acquisition of a new single-seat fighter. Deliveries of the GE Aviation F414-powered jet will start in 2019 for the Swedish air force, followed by aircraft for export customer Brazil.

Flight Fleets Analyzer shows that Thailand operates 11 Gripen C/Ds. It had 12, but one was lost in a January 2017 crash during an air show in Thailand, killing the pilot.