The delivery was made on 2 April at the Daegu air base and all of the F-15Ks were delivered on cost and on schedule, says Boeing.

"Boeing is proud to have worked with the ROKAF to ensure that their F-15Ks included all the capability and power necessary to defend their homeland through 2040 and beyond," says Boeing F-15 programme vice-president Roger Besancenez. 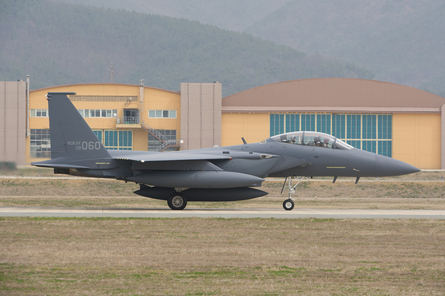 South Korea chose Boeing's F-15K in June 2002 for a supply contract for 40 of the fighter jets. Boeing delivered its first two F-15Ks in October 2005. It won an additional contract to produce 21 additional F-15Ks in April 2008 as part of the country's Next Fighter II programme.

Boeing has proposed the F-15 Silent Eagle - which shares a great deal in common with the F-15K - for Seoul's F-X III requirement. Its rivals in the F-X III are the Lockheed Martin F-35 Joint Strike Fighter and Eurofighter Typhoon.

Bids for the F-X III competition are due by 18 June, with a decision possible by late 2012. DAPA did not specify the number of aircraft it intends to obtain under F-X III, but industry sources have previously said the number is around 60. The aircraft will replace South Korea's McDonnell Douglas F-4 Phantoms.

Industry observers feel the race is primarily between the F-35 and F-15SE. At the Seoul air show in October 2011, Lockheed and Boeing representatives stressed the respective merits of their aircraft.

Lockheed highlighted the ability of the stealthy F-35 to penetrate enemy airspace, while Boeing emphasised the F-15SE's heavy weapons payload and new low observable features that would be of great utility in the early days of a war.