The 80kg version was used to demonstrate autonomous crop-spraying operations earlier this month after making its debut flights in late January this year. The 120kg version test programme will include rice paddy spraying trials in late June or early July.

Speaking at the IDEX exhibition in Abu Dhabi, Ucon head Dr Sang Choi said that a phased development approach was being followed with the company first flying a 30kg MTOW VTOL demonstrator in the second half of last year.

The VTOL demonstrators are based on traditional helicopter configurations with the autonomous flight control system using the same underlying algorithms developed by Ucon for its fixed wing UAVs. Researchers at the University of Seoul are participating in the control system development says Dr Choi, but the overall transition from fixed wing to rotary wing platform application has been achieved rapidly and effectively.

The agricultural sector is regarded by the firm as a significant near-term opportunity he says, with the initial focus being the South Korean domestic market.

The planned 120kg aircraft would form the basis of the proposed commercial system, but further variants are being considered for the military sector as a long term focus.

A 40kg commercial version is also under study, leveraging the wider development programme says Dr Choi but mainly using the 30kg demonstrator as its basis. The small size of the proposed platform is intended to support the requirements of the airborne commercial imaging and aerial photography markets.

New fixed wing UAV initiatives being worked on by the company include a micro-air vehicle and a mini-UAV with a span of less than 1m. Funded design work on both systems is being carried out on behalf of an unnamed national government customer says Dr Choi.

Ucon used IDEX to unveil revised configurations of its RemoEye 02 and 06 series mini-UAVs, with both systems now incorporating parachute landing-systems as an adjunct to continued use of deep stall flight termination. 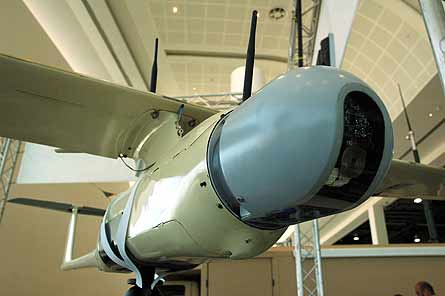 Other RemoEye 06 changes include a fully integrated stabilised turret-mounting for its imaging sensors, and the addition of an airbag landing-cushion to improve payload protection. The airbag inflation system has seen the addition of an intake fan on the upper rear of the air vehicle at the base of the wing mounting-pylon. 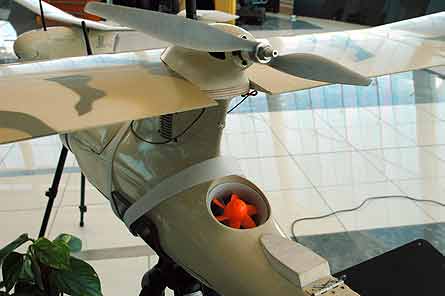 Ucon system is to this week conduct flight demonstrations of RemoEye 02 and 06 for the South Korean national police force. Dr Choi says that the service is considering small fixed wing and rotary wing UAV systems to support surveillance operations in regional and urban areas.