Ikhana will loiter at 27,000ft and use its infrared camera to detect the Orion capsule, after which the camera operator will switch to an optical camera that will observe Orion’s descent through its parachute deployment and landing in the Pacific Ocean.

Video will be sent in real time via satellite to NASA TV for live broadcast of the module’s descent and recovery, the agency says.

Ikhana will be flown from its ground control system based at NASA’s Armstrong Flight Research Center on Edwards AFB in California. The aircraft will depart Armstrong some hours before EFT-1 launches in order to arrive at the planned re-entry area ahead of the Orion module. 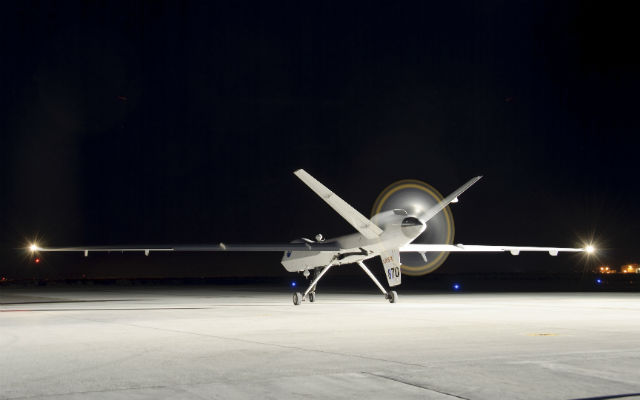 The NASA programme is designed to test human spaceflight beyond low-Earth orbit, which includes the development of the Orion spacecraft.

The spacecraft will eventually take astronauts beyond low-Earth orbit to deep space, while providing emergency abort capability, sustenance of the crew during space travel and provision of safe re-entry from deep space.

The unmanned EFT-1 flight will take Orion from Cape Canaveral Air Force Station to an altitude of approximately 5,800km (3,600 miles) above the Earth’s surface, some 15 times further than the International Space Station’s orbital position, NASA says. This will be the furthest that any human spacecraft has flown in some 40 years.

After the test flight, Orion will re-enter the atmosphere at a speed of over 20,000mph before landing in the water and being recovered, which the Ikhana will monitor.

The flight was originally scheduled for 4 December, but was pushed back. Weather permitting, it is now expected to take place at 07:05 EST on 5 December, and has a 2h 39min window to launch.