Spain has taken delivery of its first Airbus Defence & Space A400M tactical transport, which will now be transitioned to its home operating base at Zaragoza in the northeast of the country.

Aircraft MSN44 carried out its maiden flight from Airbus’s Seville final assembly site in September, and is the first of 27 examples on order for Spain.

“Every delivery to every customer is of huge importance to us, but being able to hand over the first aircraft to Spain from our final assembly line in Seville is a source of particular pride,” says Fernando Alonso, Airbus Defence & Space’s head of military aircraft. 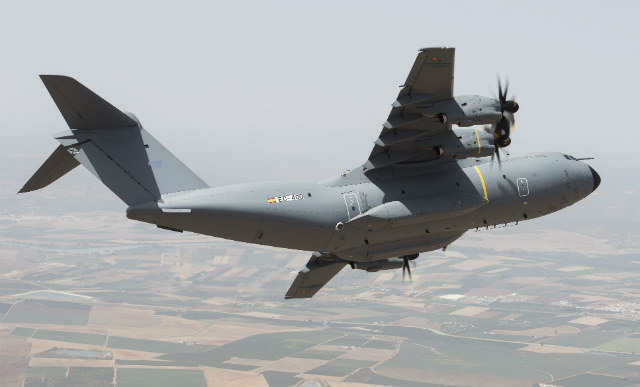 MSN44 carrying out its maiden flight in September

The A400M will replace Madrid’s Lockheed Martin C-130H fleet. Its air force operates 12 of the type, which range from 32 to 42 years old, Flight Fleets Analyzer shows. The Atlas can carry almost double the payload over the same distance as the Hercules, or the same load twice as far, Airbus says.

This is the 34th A400M delivery from a total 174 on order, and Spain is the sixth nation to receive the type, after France, Germany, Malaysia, Turkey and the UK.

Although 27 examples are on order for Spain, the air force announced in 2015 that it would initially guarantee to take delivery of only 14 of these at a reduced pace up until 2022. It will then look at funding options to cover deliveries post-2025 for the remaining 13, or look at alternative sales avenues for the aircraft.

The delivery came days after Airbus announced that two A400Ms had successfully demonstrated the in-flight transfer of fuel using a fuselage-housed hose-and-drum unit.