Such nations are being offered industrial participation in the Spartan project or on other Finmeccanica group products such as the Alenia Aermacchi M-346 advanced jet trainer, the ATR family of regional airliners and special mission aircraft, and the Eurofighter Typhoon, plus subcontract opportunities in the production of the Lockheed Martin C-130J and Boeing 787 airliner. 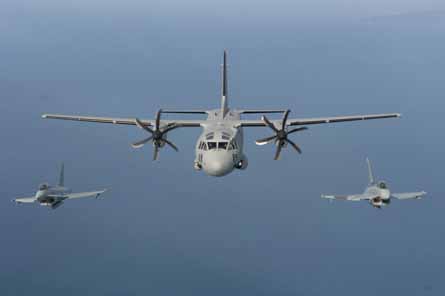 For example, Czech training aircraft manufacturer Aero Vodochody already produces centre wing boxes for the C-27J, although Prague will not make a decision until late this year or early 2008 in its requirement for between four and six new transports. The Spartan is facing competition from EADS Casa's C-295, while Antonov has also pitched its An-32 and twin-turbofan An-74.

Australia was earlier this year reported as having already selected the C-27J for an expected 12-aircraft deal to at last replace its air force de Havilland Canada DHC-4 Caribous (Flight International, 27 March-2 April). A formal decision is scheduled later this year, with Alenia teamed with Boeing Australia. If selected, the C-27J will form part of a modern air transport fleet also to comprise Airbus A330 tanker-transports, Boeing C-17s and C-130Js. The C-27J had also been considered the front-runner to replace Canada's fixed-wing search-and-rescue fleet of DHC-5 Buffalos, although Ottawa could delay its decision for between 15 and 19 aircraft until later this decade.

But it is in the continental USA that the greatest hopes have been held for the C-27J, with the aircraft offered for the Joint Cargo Aircraft requirement under a bid primed by L-3 Communications Integrated Systems and also involving Alenia North America, Boeing Integrated Defense Systems and the Global Military Aircraft Systems joint venture.

The US Air Force requires an intra-theatre airlift asset to replace its Shorts C-23 Sherpas and earlier C-27As, while the army needs an on-demand fixed-wing transport to work alongside its Boeing CH-46 transport helicopters. Expanded from the army-only Future Combat Aircraft requirement, the 145-aircraft JCA deal - due to have been awarded on 7 June - is worth $2.8 billion for an initial five-year phase to cover the production of 55 aircraft. Deliveries are expected to start with three aircraft during the current fiscal year, with this to rise to an annual build rate of 26 aircraft by FY2011.

The JCA contest came down to a two-way battle between the C-27J and C-295, with EADS Casa's smaller CN-235 and the short-fuselage C-130J eliminated after final bids were submitted during January. The L-3 offer included a proposal to build US C-27Js in Jacksonville, Florida. With a decision to be known soon Alenia will not have to wait long to see whether the most influential of military users will provide a massive boost for its C-27J programme.

But regardless of the outcome, Alenia is convinced that its product will have a long and successful future. "The aircraft is an excellent fit for countries that require a truly rugged and military solution for their intra-theatre lift fleet," says Alenia North America president Giuseppe Giordo.