The tweet, which includes an image of an “anticipated route network”, shows routes Vancouver-based Jetlines may serve once it grows its fleet to 16 aircraft, a milestone company executives have said they expect to reach within three years of launch.

Jetlines has its sights on roughly 40 routes.

Those Include about one dozen from Hamilton International airport, which is about 80km (50 miles) from Toronto, to Atlantic Canada, Florida, the Bahamas and Jamaica.

Other possible routes include those from Victoria on Vancouver Island to both Honolulu and Kahului in Hawaii. 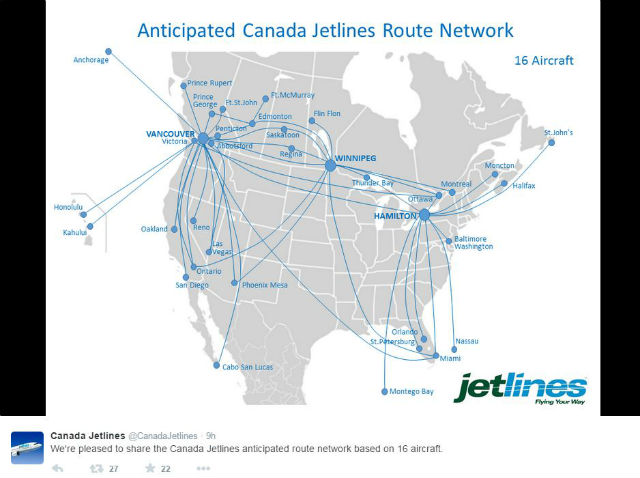 Jetlines executives have been seeking in recent weeks to generate interest from investors in an effort to bring the company public through an initial public offering, a move the company expects could generate C$50 million ($40.2 million) in launch funding.

The company intends to begin operations with two leased Boeing 737-300s and to have 16 aircraft within three years.

Late last year, Jetlines announced it signed a deal with Boeing to acquire five 737 Max 7s, with deliveries beginning in 2021. The deal, which includes options for another 16 aircraft, is contingent on the IPO.

Jetlines is positioning itself as an ultra-low-cost carrier with expenses 30% to 40% less than prime competitors Air Canada and WestJet.

Lower costs could enable Jetlines to offer fares 50% less than competitors, which would spur demand from customers who would otherwise not travel, company executives have said.