IAG's letter of intent to take 200 Boeing 737 Max jets will help prevent it from becoming a captive customer of Airbus's when it comes to the short-haul fleet, in the view of chief executive Willie Walsh.

During a webcasted panel session at the ACI Europe annual congress in the Cypriot city of Limassol on 26 June, Walsh noted that there had been "concern" within the airline group for some time that it was becoming too reliant on the European airframer. 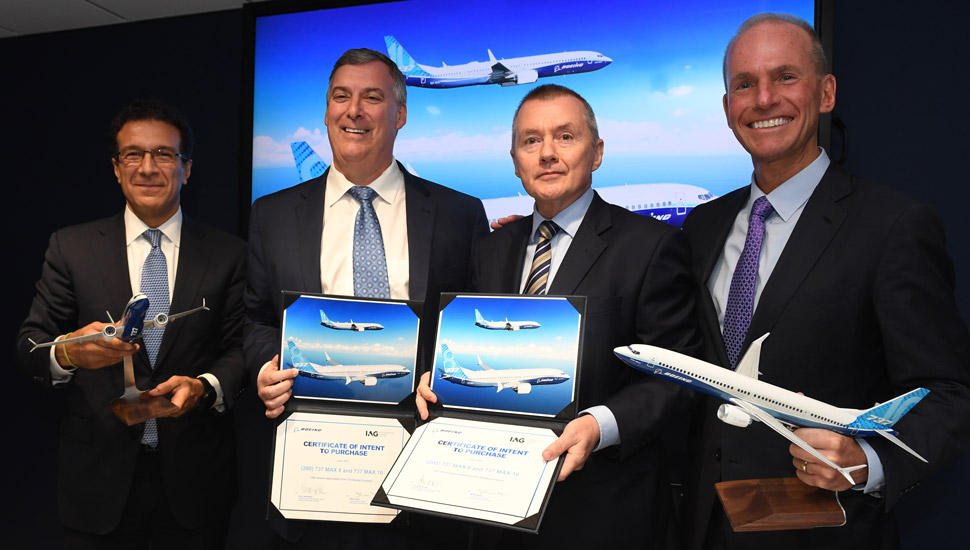 IAG and Boeing at the 2019 Paris air show

IAG weighed up a Boeing narrowbody order in 2012, but decided not to proceed because of the cost of changing to a different narrowbody type at the time, he recalls.

Seven years on, he says, IAG has the capacity to operate across networks with different aircraft sub-types, making the Max deal feasible.

Walsh says he is looking forward to the Max getting a "clean bill of health" and takes heart from the regulators' "working together" to bring the jet back into operation.

Separately, Walsh says that he would have ordered 777-300ERs in place of 787s had he known about the delays that would afflict the Dreamliner programme.

IAG-owned British Airways ordered six 777-300ER aircraft, taking options on a further four, in August 2008. At the time it said this was an interim measure to cope with delays to the Boeing 787 programme.

Walsh says IAG delayed ordering aircraft of this model in 2007 because the group was waiting for the roll-out of the 787-8, -9 and -10. While the group did ultimately also opt to take more 777s, Walsh says he would have been done so even earlier had he been aware that the 787 programme's schedule would slip.