Aegean Airlines has taken a bigger step into the Romanian market by becoming the majority shareholder in leisure operator Animawings, the Greek carrier said on 14 October.

Aegean acquired a 25% stake in the airline – which was established by tour operator Memento Group – in 2020, but has now upped its holding to 51%.

“The long-standing and successful partnership with [Memento Group] is evolving into a joint business venture in Romania,” says Aegean chief executive Dimitris Gerogiannis. “We strongly believe in the potential of the Romanian market and the capabilities of our partner Memento Group.” 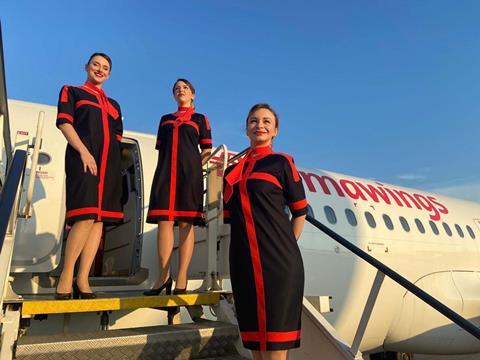 Animawings crew in front of the carrier’s A320

Aegean says it will provide the Romanian carrier with three aircraft for the summer 2022 season for charter and scheduled flights. The Greek carrier will “oversee and support operations”, it says, while Memento will provide commercial functions.

Cirium fleets data shows Animawings has a single Airbus A320 in service today – YR-AGA – which was previously operated by Aegean.

Animawings launched operations in July 2020 with its first flight from Bucharest Henri Coanda airport. Its website advertises services to destinations including Hurghada, Zanzibar, the Maldives and Dubai.

With its increased stake, Aegean values its total investment in Animawings at €1.3 million ($1.5 million).

Aegean describes Memento as “an important and long-standing customer”, for which it operates charter flights from Romania to Greece.