Allegiant Travel Company, the parent of Allegiant Air, expects “substantial opportunities” to propel its earnings during 2022 as it experienced the “busiest and best Spring ever”.

The Las Vegas-based low-cost carrier says that the first three months of the year were a turning point for the company as it recovers from the two-year pandemic. 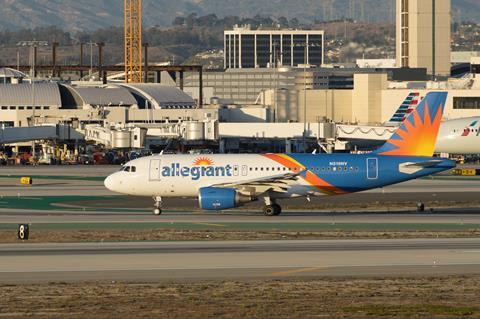 It is Gallagher’s 61st and final time presiding over the company results, as he steps down from the post, which he’s held since 2003, in June. His successor is company president John Redmond.

While revenue rose, costs also climbed, leaving the company with a $7.9 million loss for the quarter, from a $6.9 million profit last year.

The airline says it was forced to cancel more than 1,000 flights – or 12% of its schedule - in late December and early January, as the Omicron variant of Covid-19 tore through the company’s ranks. But the company says it was able to stabilize the operation by March, when more travellers returned as well for spring break travel.

“This demand for leisure travel shows no signs of slowing down,” says Scott DeAngelo, the company’s chief marketing officer. Executives expect Allegiant’s second quarter revenue will be 28 to 32% higher than 2019 levels.

“We have adjusted our growth rate for the second quarter to better align with the high fuel cost environment and prioritize operational performance,” he says, adding that the airline also now expects a 9%-13% increase in capacity as measured in available seat miles (ASMs), from 2019 levels.

As with industry peers, Allegiant is grappling with a shortage of flight crew, as a result of the combination of pilot attrition and the difficulty in bringing new pilot candidates. Between July 2021 and April 2022 it hired 200 new pilots, and expects to have 250 new pilots in place by the time of peak summer travel, says chief operating officer Scott Sheldon.

The company lost a total of 123 pilots since last May, and a more first officers (80) than it had expected to, he adds.

Last month the company annoucned it would invesrt $95 million to open a crew base in Provo, Utah later this year. It expects to base four aircraft there and hire almost 160 people.

In December, Allegiant applied to the Department of Transportation for approval of a commecial alliance with Mexican ultra-low-cost carrier Viva Aerobus that would not only expand low-cost flying between the USA and Mexico, but also give Allegiant an equity stake in the Monterrey, Mexico-headquartered carrier.

The companies are still awaiting approval for the joint venture, but Allegiant is ”on track to begin selling flights to Mexico by the end of the year”, Redmond says.