American and Dallas/Fort Worth commit to new 24-gate terminal

American Airlines is committing to further growth at its Dallas/Fort Worth base, inking an agreement with the airport for an up to $3.5 billion new terminal at the hub.

The carrier and airport will develop the up to 24-gate terminal F in the southwest corner of Dallas/Fort Worth's terminal complex under an agreement announced today. Design work will begin immediately with various layouts under evaluation - the facility has historically built semi-circular shaped terminals - and a target opening in 2025. 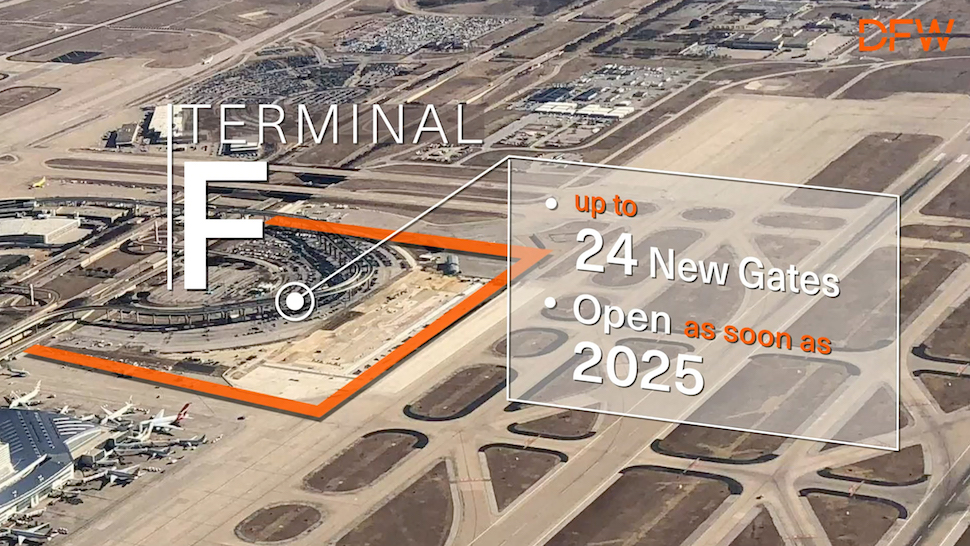 American and Dallas/Fort Worth will also upgrade terminal C, which is solely used by the airline, as part of the project.

"DFW is American's largest hub and a central gateway to our extensive international and domestic network," says Doug Parker, chairman and chief executive of American, in a statement. "The plans we're announcing today will allow for the continued growth of DFW and ensure the airport remains a premier gateway for American for many more years to come."

The airline plans to grow capacity at Dallas/Fort Worth by 10% this year, accounting for nearly a third of its forecast roughly 2.5% increase in system capacity, Cirium schedule data shows.

Dallas/Fort Worth is just the latest US airport to announce a major capital expansion. Denver is investing $3.5 billion in new gates and a streamlined terminal, Los Angeles International is seeing more than $4 billion in capital investments by airlines, and a more than $8 billion redevelopment of the terminal complex at New York LaGuardia is underway with the first concourse opening in December.

The investments will help US airports keep up with traffic growth, which hit a record one billion passengers in 2018, US Department of Transportation data shows. Dallas/Fort Worth was the fourth busiest in the country with 64.8 million passengers.

"The new terminal F and the expansion that could follow will provide the region with the growth it needs to compete with international business centres," says Sean Donohue, chief executive of Dallas/Fort Worth airport, in a statement.

Over the next three years, American is concentrating capacity growth at its three most profitable hubs. Dallas/Fort Worth growth occurs this year with Charlotte the target in 2020 and Washington National in 2021. The move is largely lauded by Wall Street analysts who expect it to boost the carrier's margins.

Earlier in May, the carrier moved into 15 renovated gates in terminal D at Dallas/Fort Worth to support its growth to up to 900 flights a day there this summer. It is also converting nine regional gates in terminal B to six gates capable of handling mainline aircraft.

The addition of terminal F could allow American to grow its Dallas/Fort Worth hub to more than 1,000 peak day flights in the future. Only Delta Air Lines' hub at Atlanta Hartsfield airport boasts more than 1,000 flights on peak days currently, schedules show.

Details of the agreement to develop terminal F will be finalised in a new lease agreement between Dallas/Fort Worth airport and airlines in the coming months, the airport says. The project will be paid for by bonds and increased airline fees.