The tie-up will enable the airlines to “grow aggressively and profitably” across Latin America as air-travel demand recovers from pandemic lows, Fort Worth-based American says on 29 July. 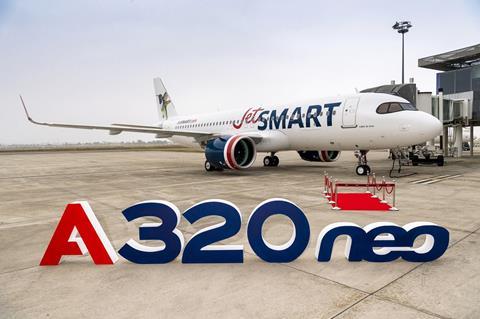 American Airlines to invest in JetSmart

American says the deal remains subject to regulatory approval. The companies have not disclosed the value of the investment or said when the deal might close.

“This proposed investment in JetSmart would give customers access to the largest network, lowest fares and best travel loyalty program in the Americas,” Vasu Raja, American’s chief revenue officer, says. Latin America is traditionally American’s strongest market, offering nearly 60% more flights from the USA to the region than its closest US major competitor, United Airlines, according to Cirium networks data.

JetSmart, owned by US private equity firm Indigo Partners, operates a fleet of Airbus A320s out of Chile and Argentina, and offers short-haul domestic and international service to 33 destinations in Latin America.

The move marks a further effort by American to strengthen its presence in Latin America – and specifically in Chile – following a failed joint venture with Chile’s LATAM. A Chilean court dashed that plan in 2019. Then, American competitor Delta Air Lines stepped in, acquiring 20% of LATAM. Delta has significantly boosted its Latin America presence.

American has since formed a codeshare pact with Brazil’s Gol.