‘Cargo could be as powerful as our passenger services’: AirAsia chief

Air cargo has been a “diamond in the rough” for AirAsia during the Covid-19 pandemic and is likely to retain a high importance to the business in the longer term, according to group chief executive Tony Fernandes.

“What was a ‘nice to have’ has become something that could be as powerful as our passenger services,” Fernandes said during a CAPA Live event on 14 July. “Covid has driven e-commerce to another level, and hence air cargo has become much more valuable.”

Amid that change, AirAsia is expecting to receive its first dedicated freighter in the third quarter of this year and is currently removing the seats from two of its Airbus A320s before deploying them as temporary freight-only aircraft. 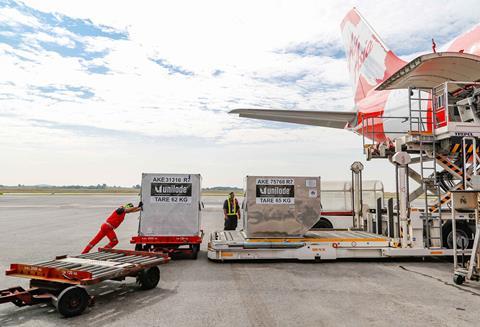 Cargo plans have been accelerated during the pandemic

The move towards cargo has been made easier by AirAsia already having air freight expansion plans in place as the pandemic hit, he explains.

“Prior to Covid, I began to see the ecommerce revolution and I started building a separate company called Teleport,” Fernandes says of AirAsia’s logistics arm.

His aim is to do to cargo operations “what we did to passengers… and eliminate the middle men”. As part of that process, AirAsia began to deal more with freight forwarders, then direct customers. At the same time, Fernandes says AirAsia “consolidated all our space across all the airlines”.

“We built a blockchain to deal with that, so there was one airline, as opposed to five different airlines,” he says in reference to the freight capacity across AirAsia Group’s carriers.

“Five our six other airlines have joined us now in selling space together,” he adds.

Amid that growth, Fernandes is also cautious about the longevity of current market dynamics.

“There is a false market out there, so we shouldn’t all get carried away, because [the return of] belly space is going to change the economics again,” he states.

Regardless, air freight is now front and centre of the carrier’s planning.

”When a budget plan is put in front of me, it’s now ‘where are the cargo routes, where are the cargo-only routes?’,” Fernandes says. “Models have to be redone, [but] it’s easier at AirAsia because we are a very nimble even though we are big. I’ve always been a change agent so the staff are used to that.”

And his ambitions stretch to the “whole logistics chain”, he says: “I also want to be in the warehouse game. We are going to cover everything.”

AirAsia Group has focused on diversifying away from its core passenger-airline business during the pandemic, and in September last year launched AirAsia Digital, of which Teleport is one of three key focus areas.

The others are an ecommerce-focused ”AirAsia Super App” and a Fintech company that provides payment, remittance and lending solutions.