Cortizo has previously held several positions with Copa, most recently that of director of pricing and revenue management. 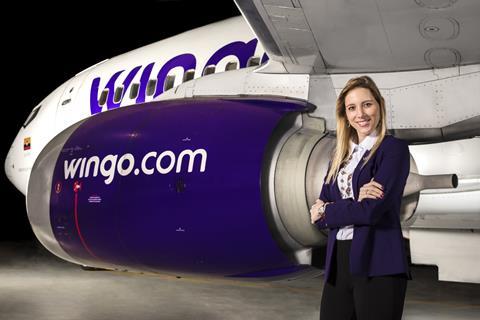 Wingo, the Colombian low-cost subsidiary of Panama’s Copa Airlines, appointed Carolina Cortizo Colon as its chief executive in November. Cortizo previously held several positions with Copa. Catalina Breton, who led Wingo from its launch in 2016, left the carrier in May. Cortizo is the daughter of Panama’s president, Laurentino Cortizo

She states: “Wingo is the low-cost airline with the most international recognition in the region. I am proud of becoming part of the team that made this possible. We will take Wingo to the next level with an important expansion plan, which will see us add more routes and and grow our fleet, starting in 2020.”

Wingo is in the process of substituting its fleet of Boeing 737-700s with larger -800s, and has suggested that it is considering opening a subsidiary in Central America.

The airline says Cortizo’s “experience with product development and revenue optimisation will add a lot of value to Wingo’s growth perspectives”.

Copa chief Pedro Heilbron notes in a Twitter posting that “Carolina, after seven years of successfully holding several positions with Copa, had to compete with candidates from all over the world to get selected for this new challenge”. He describes here as “a great example of the potential of Panamanian women”.

Cortizo is the daughter of Panama’s president, Laurentino Cortizo.