A panel of senior airline executives contend that their carriers are nimbler after over 12 months mired in the coronavirus pandemic, largely due to ever changing government requirements.

Tara Naidu, chief of commercial at Air India Express, says that her carrier is operating about 50% of pre-pandemic capacity. It had been operating at 60% before India’s second infection wave hit in March. 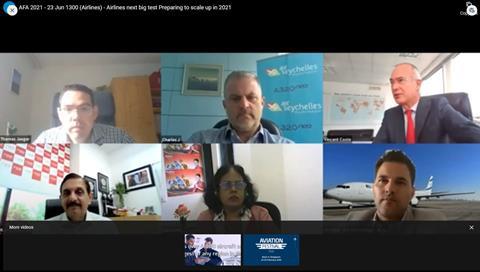 “What’s important is the rules keep changing,” she says. “So it’s very important to react and operate in a way that you follow those rules.”

She notes that the planning horizon is “very, very small”. Forecasting demand for the next few months is extremely difficult, so the airline focuses on the next two or three weeks.

After India’s second wave hit, many countries restricted traffic to one-way, making it all but impossible for Air India Express to cover costs.

“So we try to combine flights where we can, depending on demand,” says Naidu. “So if we have operations to two points in India from the same country, then we try and combine those.”

SpiceJet’s Hingorani agrees that planning horizons are extremely short. Before the second wave, the carrier had scaled back up to 60% of original capacity. Flights to some overseas destinations, such as Male and Dubai, were enjoying excellent loads. The second wave and the resulting travel restrictions imposed a re-think.

“Once every other country shut us down because of our second wave, we had to completely focus on whatever we could on domestic travel,” he says.

To help fill its aircraft, SpiceJet pivoted to carrying unskilled laborers who were travelling home from India’s major cities to the country’s rural areas.

“And so we operated flights to unheard of airports in eastern central India from where most of the unskilled labor comes from,” says Hingorani.

Gulf Air’s Coste says that the crisis has seen Gulf Air’s various departments working far more closely together. This has allowed the carrier to react quickly when opportunities arise, such as news that a country may be added to another country’s red list.

Johnson, of Air Seychelles, says that traffic collapsed early in the crisis. This obliging the airline to effectively become a cargo operator given that the Seychelles relies on imports.

Passenger flights have resumed, but the market has changed. Before Covid-19, Germany, France, and the UK were the country’s biggest source of tourists. This market has all but stopped, but a new market has opened in the form of Russia and Eastern Europe. The airline has also boosted services to Tel Aviv, where it had previously only operated once weekly.

El Al’s Biger says that the airline has always had a focus on data, but Covid-19 has had a profound impact on booking curves. Assumptions made about passenger traffic in the pre-pandemic days no longer stand.

“Previously, things were very predictable, now they are not,” says Biger. “From an IT perspective, how do you adapt to that challenge of everything that you did previously in revenue management and data analytics being essentially thrown out the window, and having to start all over again?”