IATA director general Alexandre de Juniac expects governments that have taken new shareholdings to help prop up cash-strapped airlines during the crisis will not be long-term investors in the carriers.

States have been forced to step in to help airlines survive the sustained grounding of passenger flights, in some cases taking or increasing shareholdings in carriers as a result. 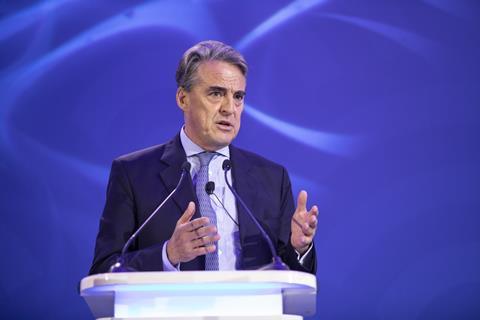 De Juniac: The requirement to continue or strengthen our environmental commitments – it will be strong

“I am not sure the state presence in the capital or shareholding of airlines will last long,” de Juniac tells FlightGlobal. “They are there for rescue. Are they going to stay for a long period? Or are they going to sell their shares when things get better, as has been the case for General Motors in the US after the financial crisis?

“I think governments will re-privatise [airlines] and I’m not sure they will use their presence to influence the way the companies are managed,” he says.

IATA has estimated states have provided around $123 billion in financial aid to airlines during the crisis so far. The largest share of this - more than $50 billion - is in the form of loans, while around $35 billion is through wage subsidies.

One area governments may look to exert influence is on heightening efforts over environmental targets. Pressure, particular in Europe, for further measures to tackle aviation’s climate change impact had been gaining momentum in the months prior to the crisis. In some cases, notably for example in French support for Air France, financial aid given during the crisis is conditional on meeting environmental targets.

“The requirement to continue or strengthen our environmental commitments – it will be strong, ” says de Juniac.

“We have said it is not necessary to include this type of constraints in the government support packages, because it is such a difficult situation,” he says, arguing that adding constraints while airlines are struggling for survival makes little sense, as long airlines maintain their commitments to tackle climate change. ”But we will still face a very strong pressure, at least to maintain or to increase our [environmental] commitments,” he says.

Whilst much of the pressure for environmental action thus far has come in Europe, de Juniac says it is a factor in other regions.

“We have seen that in the US, when the airline support package was discussed in the Congress, there was a very strong voice that was in favour of environmental criteria. It was an important concern in North America. Europe is ahead of that, as has always been the case on this subject, but they will be followed by a lot of countries in the world.”