Delta Air Lines received the first Airbus A220 bound for a North American carrier today, ending a bumpy road to the aircraft's delivery.

The Atlanta-based carrier took the aircraft, an A220-100 registered N101DU (MSN 50020), in a ceremony attendant by executives from Airbus, Bombardier and Delta, as well as local leaders, at the joint Airbus-Bombardier assembly line at Montreal's Mirabel airport on 26 October. 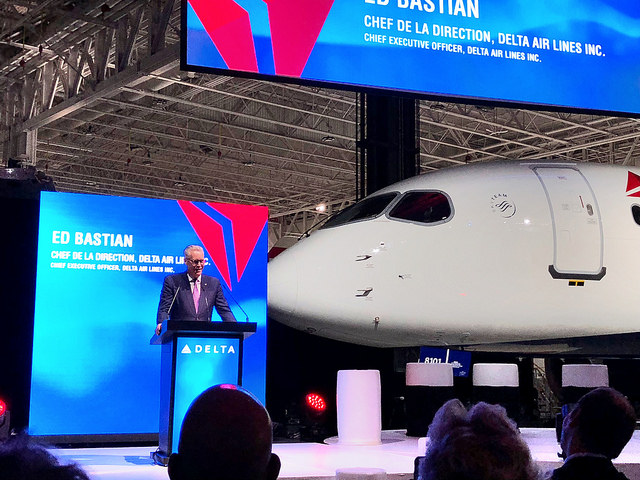 "While we've worked through a lot of challenges since that time… despite all the tariffs and trade and political challenges, we never wavered," says Ed Bastian, chief executive of Delta, at the event. "We knew this plane needed to fly."

The delivery marks completion of a turbulent journey since Delta placed its order for 75 A220-100s (then called CS100s) in April 2016. That order was challenged by Boeing at the US International Trade Commission (ITC) in 2017, with the US airframer claiming Bombardier received unfair subsidies and that discounts given by Bombardier to Delta amounted to dumping at below-cost in the US market.

After the US Department of Commerce levied a 292% tariff on each CSeries imported, the ITC ruled this January that the sale did not harm Boeing or any US industry, throwing out the proposed tariffs and paving the way today's delivery.

However, Bombardier had already agreed to sell a 50.01% stake in the CSeries programme to Airbus, a deal that closed in July.

Guillaume Faury, president of Airbus' commercial aircraft division, says the delivery could not have happened without an international "partnership that spans the Canadian, American and European aviation sectors".

"It is... an enormous source of pride for everybody at Airbus to see this remarkable aircraft in the colours of Delta Air Lines," he says. 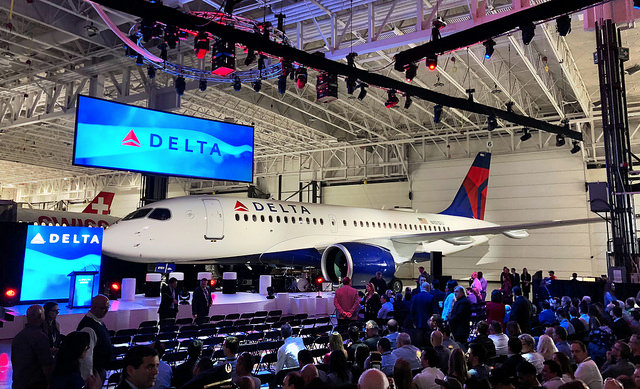 Delta's first A220 at the delivery event

The aircraft will enter service from the airline's New York LaGuardia hub on flights to Boston and Dallas/Fort Worth on 31 January 2019. It will roll out to five other markets, including Detroit, Houston and Salt Lake City, through August.

Delta's decision to add the A220 to its fleet is part of its divergent strategy from competitors American Airlines and United Airlines. While the latter two have shied away from the 100-seat mainline aircraft segment, Delta embraced it, first with the addition of 88 leased Boeing 717-200s in 2013 and now with the new Airbus narrowbody.

Delta claims 100-seat aircraft allow it to generate more revenue than competitors by offering more product differentiation in smaller markets, and attract customers who prefer a mainline jet over a regional aircraft.

American will remove its last 20 Embraer 190s in 2019, and United continues to mull a potential 100-seat aircraft order.