Delta to debut A220 at New York LaGuardia

Delta Air Lines will introduce the first Airbus A220 in North America at New York LaGuardia airport, making good on promises that the aircraft would initially fly from the Big Apple.

The Atlanta-based carrier says it will introduce the A220-100 on flights from LaGuardia to Boston and Dallas/Fort Worth (DFW) on 31 January 2019. The aircraft will be configured with 109 seats, comprising 12 in first class, 15 in extra-legroom economy and 82 in economy. 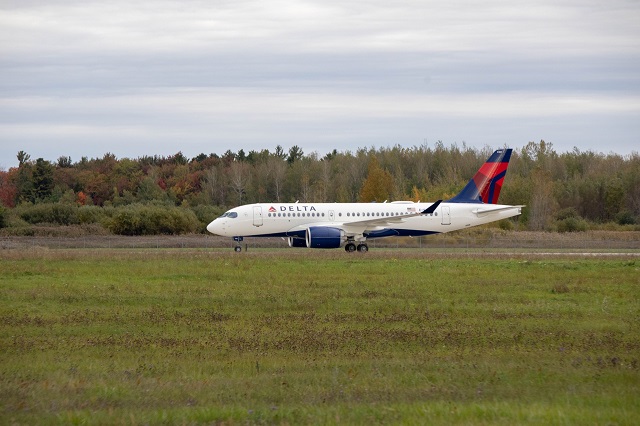 Executives at Delta have previously said that the carrier would use the aircraft on longer business routes operated with regional aircraft, like from the coasts to Texas.

"Where we're purposely putting [the A220s] is to improve our product on our longest-haul [Embraer] 175 or [Bombardier] CRJ900s into thinner business markets," said Joe Esposito, senior vice-president of network planning at Delta, in August.

For example, Delta flies primarily 69- and 76-seat E170s and E175s between LaGuardia and DFW, FlightGlobal schedules data shows. These will likely be replaced by A220s when the new schedule is loaded on 13 October.

The airline plans to use the A220s to replace smaller jets in its regional fleet, placing the aircraft on routes operated with 76-seat regional jets and using those aircraft to remove inefficient 50-seaters.

Delta says today that it does not face "any obligation for payment of any kind to the manufacturer for routes flown beyond any mileage threshold", when asked about comments made on possible obligations at a US International Trade Commission hearing in 2017. Greg May, senior vice-president of supply chain management and fleet strategy at the airline, said at the hearing that Delta was "required to pay Bombardier additional payments" if it operated the A220, then the CSeries, on routes averaging more than 1,609km (1,000 miles).

Of Delta's ten initial routes for the A220, six are longer than 1,609km with LaGuardia-Houston the longest at 2,279km.

The carrier will take delivery of the first of 75 on-order A220-100s this quarter, executives said during an investor call on 11 October.

The first aircraft (MSN 50020) made its maiden flight from Montreal's Mirabel airport on 6 October.

Aside from Delta, Air Canada and JetBlue Airways are the only firm A220 customers in North America. The Canadian flag carrier expects its first of the aircraft in 2019; JetBlue, in 2020.

Updated with clarification of 1,000 mile threshold comments from Delta.