EasyJet has expressed confidence it now has enough cash to survive a nine-month grounding of its fleet after securing additional funding.

The UK budget carrier, which grounded its entire fleet on 30 March amid the coronavirus crisis, said in a trading update on 16 April that it has signed two term loans totalling around £400 million ($492 million), secured against aircraft and maturing in 2022. 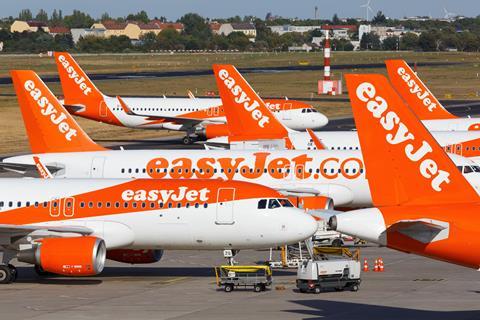 EasyJet is also in talks for a sale and lease-back of additional aircraft from its fleet, which it expects will bring proceeds of £400-550 million.

Together with previously announced funding measures, that takes the airline’s anticipated cash balance to approximately £3.3 billion.

“We are now in a position to remain cash positive even if we are grounded for nine months,” chief executive Johan Lundgren told journalists on a call.

He says that while he does not expect the crisis to last that long, EasyJet is still looking at other sources of funding and assistance, including from governments in all its major markets, and he is confident of being able to raise more funds if needed. .

Lundgren says once countries lift travel restrictions, the carrier will need two weeks to get the majority of its fleet back up and running.

He expects that domestic travel will start first and then expects to see bilateral arrangements where countries open up their borders to each other, depending on the public health situation.

“I do think there will be demand for holiday passengers. I think the lockdowns we have seen in countries mean a lot of people want to go out and have a holiday, though it depends on what restrictions are in the countries,” he says.

“There will be a recovery…at some point in time we will get back to a situation where the demand will be what it was,” he says, although he declined to give a prediction for when that might be.

Lundgren says that EasyJet is planning to keep middle seats on aircraft free to allow passengers to keep their distance, but that the expected lower demand when flying does restart would help with that.

Founder and largest shareholder Stelios Haji-Ioannou has waged a public war with EasyJet to try and force it to abandon orders for 107 Airbus jets.

He has pushed for a general meeting to remove company directors, including chief financial officer Andrew Findlay.

Lundgren says the public row is “not helpful” and that it is a distraction while the company is grappling with “one of the worst crises ever seen in aviation”.

EasyJet disclosed on 9 April that it had deferred the delivery of 24 aircraft that the carrier was originally due to take in 2020-2022. The airline also has an option to defer a further five aircraft due to be delivered in 2022.

“It adapts [us] to a reduced environment for the coming years, and gives flexibility to pick up demand as we progress through that,” Lundgren says.

In the trading update, EasyJet points out that it cannot just cancel the order, because that would incur further costs.

For the first half to 31 March, EasyJet expects to report a loss before tax of £360-380 million, including a hit of £175-185 million from the over-hedging of fuel and foreign exchange.

Stripping out the hedging impact gives an expected reported loss of £185-205 million, an improvement on last year’s first half loss of £275 million.

Airline revenue per seat at constant currency is expected to have increased by 10.2% in the first half, driven by a strong performance in January and February.

The carrier said that given the current uncertainty it could not provide financial guidance for the rest of the 2020 financial year.