The Honolulu-based carrier on 27 October also detailed the agreement it reached with Boeing earlier this month to delay deliveries of its long-awaited 787-9 Dreamliners.

Hawaiian has ten orders with the Chicago-based airframer, which were due to begin delivering in early 2021. Now, the carrier says the first example will arrive in September 2022 and enter service the following year. The rest will be delivered by 2026. 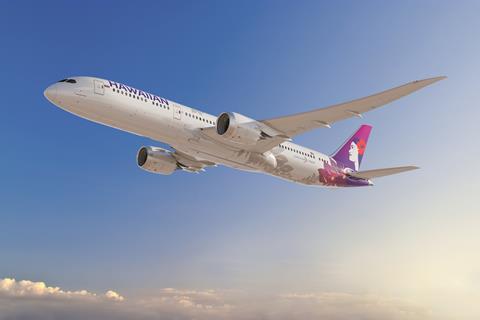 A rendering of Hawaiian’s Boeing 787-9 Dreamliner, which the airline expects to begin receiving one year later than planned

“The 787 is a terrific airplane and will be a vital part of our fleet in the future,” chief executive Peter Ingram says during the company’s quarterly earnings call. “But we don’t need it in 2021.”

The aircraft were due to replace the airline’s Airbus A330-200s on long-haul routes to Asia, as well as to Boston and New York City, two of the longest domestic flights in the world. The 787s have range to potentially connect Honolulu to a European destination such as London.

“It’s less about a change in our view of the long term and more about the fact that short-term we are just in a dramatically different demand environment than we were at the beginning of this year,” Ingram says. “The complexity of entering a new fleet into the business, and the inherent inefficiency – it’s a lumpy process when you go through it. We wanted to move that to the right a bit to allow us to focus in 2020 and 2021, to stabilise and restore the business, and we will be in a much better place in 2022.”

TESTING INSTEAD OF QUARANTINE

The coronavirus pandemic and its associated effects on the company’s business remains top of mind for Hawaiian’s executives, who expressed relief that the state’s mandatory 14-day quarantine order has been modified. Travel restrictions were among factors contributing to a third quarter in which Hawaiian’s revenue tumbled 90% year-on-year, to $76 million.

On 15 October, Hawaii relaxed the quarantine for travellers arriving in the archipelago. For the first time in almost six months, inbound customers were able to side-step the 14-day mandatory isolation rule if able to show a negative coronavirus test no more than 48h old.

“People [in Hawaii] are still getting comfortable with the notion of having so many visitors back in the state,” Ingram says. “We need to make sure that we are making people aware of what they need to do to get tested, so that we can keep the cases down and improve the overall comfort level with increased visitors in the state.”

Hawaii has or is looking to implement pre-departure testing programmes in the US, as well as in Japan, Korea – two of the airline’s most vital markets – and other regions.

Ingram is “encouraged that the Hawaii pre-travel testing programme will have a marked inflection on the trajectory of our business.”

Over the past weeks, Hawaiian restored numerous routes to the US mainland. The airline’s senior vice-president for revenue management and network planning Brent Overbeek says that by the end of the fourth quarter the carrier will have reinstated flights to all of its 13 pre-coronavirus destinations on the mainland.

The airline plans to have about 54% of overall capacity restored in the fourth quarter, rising to 60% during the end-of-year holidays, Overbeek adds.

“We are encouraged how demand is coming back,” Overbeek says, adding that the airline is seeing “a different booking curve” than it is used to, with customers waiting later to make travel plans.

In addition, Hawaiian’s competitors are offering promotions as the state begins to open up. “It is important for us to remain competitive.”

Two weeks ago, Hawaiian said it would be suspending its regional subsidiary Ohana by Hawaiian’s flights to neighbouring Molokai island and Lanai on Maui, beginning on 1 November, due to complexities of operating those routes in the current environment. However, on 26 October the airline reversed that decision.

The planned stoppage was triggered by a clause in the airline’s contract with pilots that regulated feeder carrier service to the smaller islands. However, Hawaiian executives now say the US Department of Transportation (DOT) will likely deem connectivity to the islands “essential”, allowing it to operate the routes for at least another three months.

“We reversed that announcement yesterday based on the fact that although we do not accept essential air service (EAS) subsidies, we anticipate that the DOT will require us to continue flying those,” Ingram says.

Ohana by Hawaiian is operated by Empire Airlines on ATR-42 and ATR-72 turboprops. The carrier serves routes between Hawaii’s capital Honolulu and Molokai as well as Lanai and Kapalua in West Maui. The Kapalua route was suspended earlier this year.