Kenya Airways cut its first-half losses by almost a third as the reopening of travel markets enabled it to more than double passenger revenues.

The improved passenger market drove an overall 76% increase in group revenues to KShs48.1 billion ($398 million) and was driven by an 85% jump in passenger numbers to 1.61 million over the first six months of 2022. That though remains a third down on pre-Covid levels. 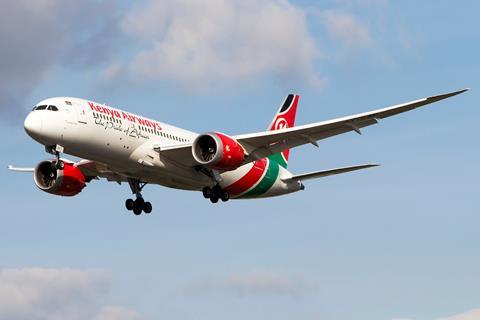 While cargo revenues increased less sharply, climbing almost a fifth, it came on top of the strong growth in the segment reported for the same period last year.

Kenya Airways chairman Michael Joseph says: ”The opening of borders worldwide has led to quick rebounds in some key markets. Lingering travel restrictions in some markets have limited the recovery.”

The increase in revenues was though in part countered by the sharp rise in fuel costs. It meant the SkyTeam carrier remained in the red for the first half, though it did reduce its operating loss to KShs5 billion from KShs7.3 billion.

”If we adjusted for the fuel price spike, the operating profit for the period would have been KShs1.5 billion,” says Joseph.

Kenya Airways chief executive Allan Kilavuka told FlightGlobal in June that the airline was continuing to focus on restructuring efforts as it seeks to secure a “sustainable cost-base”, but was hopeful of returning to growth in 2024.

“Our focus is to ensure that we strengthen our operational resilience through innovation and diversification to deliver great and reliable services to our customers,” he says today. ”We have transformed the airline during the pandemic, enabling us to emerge with renewed strength, underpinned by a product, network and service that customers value.”