KLM has received final approval for its “crucial” €3.4 billion ($4 billion) loan package from the Dutch government.

The airline states in a 6 November stock-exchange notice that following agreements with eight trade unions, it has now “satisfied a key requirement” for accessing the aid, “ensuring final approval” of the government loan package. 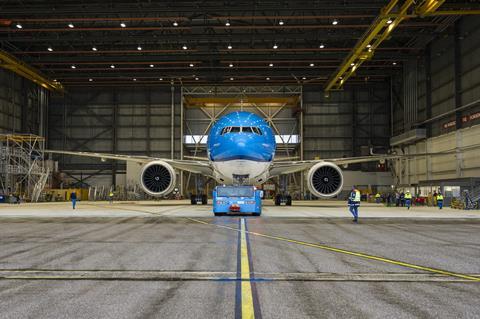 ”KLM is in the midst of the worst crisis in its 101-year history, with the Covid-19 pandemic eroding its strong performance of recent years,” says the carrier. “The €3.4 billion loan package, consisting of a government loan and guarantees on bank loans, is crucial to securing the future of the airline and its network for the Netherlands.”

One of the conditions of the aid was that all KLM employees agreed to adjust certain employment conditions for the duration of the loan, which is set to last until 2025.

The airline earlier this month reached agreement with the unions representing its flight attendants, ground personal and pilots – the last hurdle it needed to overcome to receive the funds.

“The outline agreements define the austerity measures that will apply until early 2022 (for cockpit crews) and late 2022 (for ground and cabin personnel),” says KLM. “It was especially important to specify the contribution that all KLM employees would be making towards the airline’s cost-reduction efforts over the entire loan period.

“To meet this demand without having to re-enter negotiations, a ‘commitment clause’ was inserted into the agreements between KLM and the trade unions.”