LATAM benefits from easing of travel restrictions in Q2

LATAM Airlines Group benefited from increased passenger demand during the second quarter of 2022 as numerous Latin American countries relaxed travel restrictions, making travel easier than it has been for two years.

The Santiago-based carrier on 9 August reported that its operating revenue rose to $2.23 billion, more than doubling its revenue during the same period in 2021. That figure was still 6% lower than in 2019, though.

“During the second quarter of 2022, LATAM group operations continued progressing on the recovery path as in the last quarters, hand-in-hand with the ease of travel restrictions in the region and a healthy demand for air travel,” the company says. 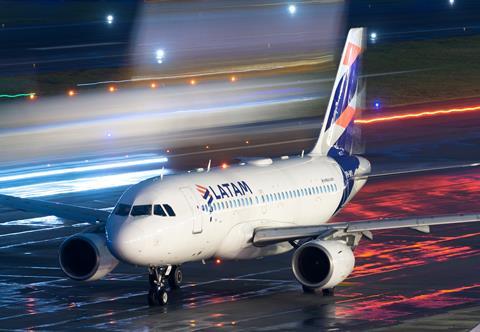 Still, the company posted a loss for the quarter, as expenses also almost doubled. In the three months between April and June, LATAM says it lost $523 million. That compares to a second quarter 2021 loss of $770 million.

LATAM’s capacity, as measured in available seat kilometres (ASKs), was 72.6% of the same quarter in pre-pandemic 2019, and more than double that of the same period a year earlier. Much of that was driven by domestic demand in Brazil, Colombia and Ecuador and what the company calls “a marked recovery” in international operations as well.

In June, a US bankruptcy court approved the airline’s reorganisation plan, just over two years after it voluntarily filed for bankruptcy protection as a result of the precipitous drop in demand during the Covid-19 crisis. In July, shareholders approved the plan, and the airline is currently implementing it.

Last month, the US Department of Transportation (DOT) tentatively approved a proposed joint venture agreement (JVA) between Delta Air Lines and LATAM, with certain conditions attached, which had been more than two years in the making. The joint venture had been approved by Chilean competition authorities in October 2021.

”Following the DOT’s statement, on July 8th, LATAM and Delta accepted the conditions proposed by the DOT,” LATAM says. The process is now awaiting DOT’s final order approving the joint venture, marking the last milestone of the process.

“With its implementation, the JVA will improve air connectivity and provide passengers and cargo customers a seamless travel experience between North and South America,” the airline adds.

LATAM has said it’s converting 10 Boeing 767 passenger aircraft to cargo freighters by the end of 2023 to accommodate surging demand for cargo transport. So far, four converted cargo freighters have been delivered, increasing the group’s cargo-dedicated fleet to 15 freighters. The remaining freighters are expected in 2023.

Looking ahead, management at the Chilean carrier warns of “significant challenges” in the coming months related to increased fuel prices as well as “a challenging macroeconomic context driven by inflationary pressures, the depreciation of emerging market currencies and a reduction of worldwide economic activity”.