Scandinavian low-cost carrier Norwegian has opened a formal consultation over staff cuts at its London Gatwick base as the sustained impact of the global pandemic on air travel continues.

The consultation relates primarily to short-haul pilots and cabin crew at Norwegian’s Gatwick base and potentially covers 259 roles. The airline has over 1,100 crew based at Gatwick. 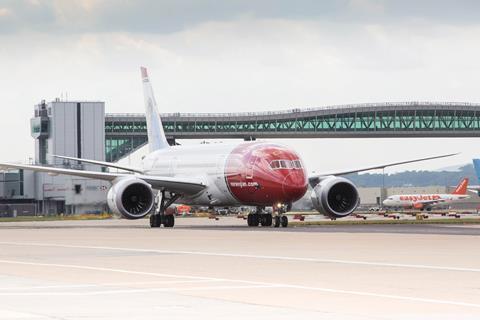 ”These unprecedented circumstances that we now find ourselves in require us to review the London Gatwick crew base in line with current business needs and the associated costs going forward,” the airline says.

”We have entered into consultation with our crew colleagues and unions based in the in UK and will look to find common solutions and mitigate redundancies.”

Norwegian has developed a large network from Gatwick, serving both short-haul and transatlantic points from the airport - where it was the third biggest operator in terms of flights prior to the pandemic.

The airline though had already begun trimming its network amid growing financial challenges even before the coronavirus crisis, and having completed a major financial restructuring in May, has since remained in ’hibernation’ mode operating around 20 to 30 aircraft on routes focused on the Scandinavian market.

The airline, which has said it will require further funding next year, aims to widen its operations again next spring and its chief executive Jacob Schram says it remains committed to the long-haul segment.