Peach to start integrating Vanilla Air network from May

Peach will start integrating the network of merger target Vanilla Air in May, with the latter’s operations set to end on 26 October 2019.

The transition will begin from May 6 when Vanilla will end its daily Osaka Kansai-Amami Oshima route, which will resume as a Peach route from 27 October.

From March 30, Vanilla will cancel its Tokyo Narita-Hakodate route, while the Narita-Hong Kong and Okinawa Naha-Ishigaki routes will be cancelled from 31 May.

In their place, Peach will launch Okinawa-Hong Kong flights from June 28, while also increasing its frequencies to Ishigaki from Narita and Osaka from 27 October. 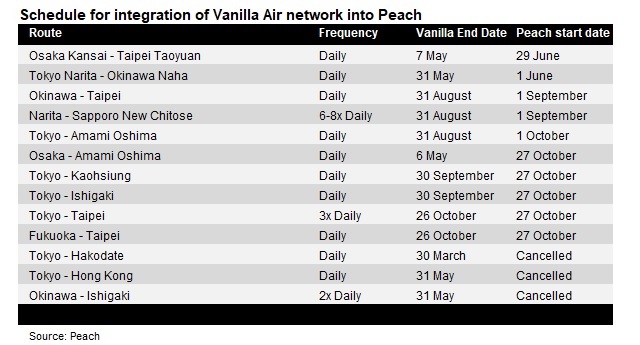 “Peach will strive to increase competitiveness in Asia, cultivate new demand, and secure the increase in demand to visit Japan by merging both airlines’ route networks and building on the brand strength that has accumulated,” the company states.

Both Peach and Vanilla are units of ANA Holdings, and the parent company announced in March plans to merge them under the Peach banner.