Philippines AirAsia (PAA) vice-chairman Michael Romero is said to be raising his stake in the low-cost carrier by acquiring the stakes held by two other shareholders.

Local media reports indicate that Romero, through his F&S Holdings company, is set to buy stakes held by the airline's president, Maan Hontiveros, and Alfredo Yao, taking his shareholding from 15.7% to 44.4%.

A profile of the company's shareholding structure shows that Malaysia AirAsia International owns 39.9% of PAA. Hontiveros, Romero, and chairman Antonio Cojuangco each own 15.7% stakes, while Yao holds 13%. 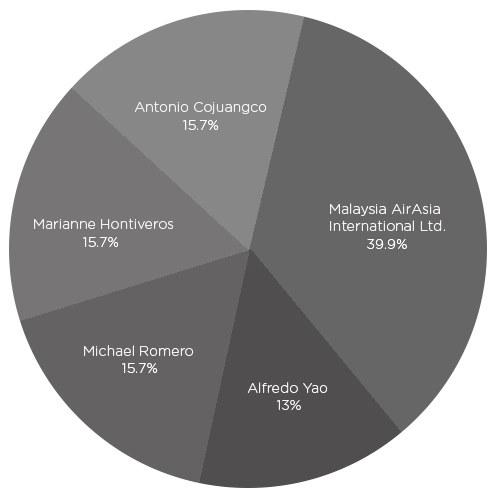 Romero was quoted in a 4 June BusinessWorld report as saying that his company is finalising the acquisition price, and that the transaction will not have an impact on the airline's board. Besides the four Filipinos, AirAsia Group chief executive Tony Fernandes and executive chairman Kamarudin Meranun are alos directors.

The report states that Philippines AirAsia is also laying the groundwork for a recapitalisation exercise, where it intends to issue around Ps17.9 billion ($346 million) worth of common and preferred shares. This is ahead of a planned initial public offering set to take place later this year, which could raise $200 million.

AirAsia declined to comment or confirm the planned transactions when contacted by FlightGlobal.