Philip Saunders, who most recently served as chief commercial officer at South African Airways, is to take up the same role at relaunched UK regional carrier Flybe.

His appointment was one of several announced as the leadership team supporting chief executive Dave Pflieger at the carrier was today disclosed. 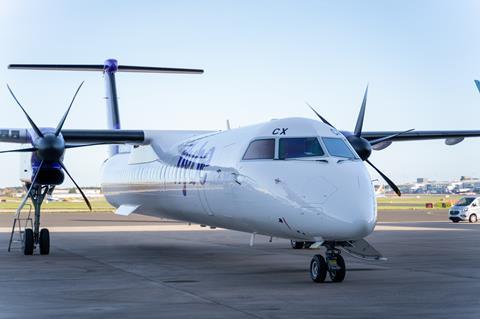 Former Flybe executive Jim Comer will take up the director of finance role.

Pflieger, most recently chief executive of Alaska regional operator Ravn, was named chief executive of the new Flybe in October. “Each one brings a wealth of professional experience and knowledge that will prove invaluable as we look to launch the new Flybe, but also create a strong community focused airline that people love,” says Pflieger.

Flybe is aiming to relaunch flights this spring, a little over two years after the original Flybe operation collapsed, after taking delivery of its first De Havilland Canada Dash 8-400 twin-turboprop in November.

The airline, which is headquartered and will have its first crew base in Birmingham, has yet to disclose a launch date or its route network.

Flybe in its original guise ceased operations in March 2020, with its remaining business and assets acquired in April last year by Thyme Opco, a company affiliated with Cyrus Capital, an investment firm which held a stake in the carrier prior to its collapse.