The airline was evaluated between October 2019 and December 2020, and the AOC was granted within the two-year validity period from when it received a business licence in March 2019, the Ministry of Land, Infrastructure and Transport (MOLIT) said in a 28 December statement. 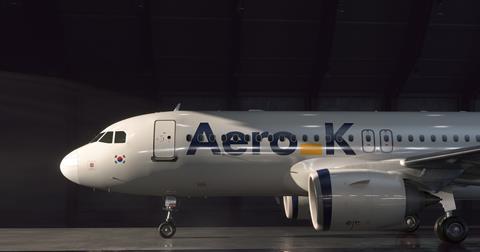 Aero K can commence operations after the necessary procedures, which includes obtaining a route permit.

The company’s finances were evaluated for its AOC application, given the ongoing global pandemic.

According to MOLIT, Aero K held W48 billion ($44 million) capital in March 2019, when it applied for a business licence, which along with plans for a capital expansion were deemed sufficient for its operations.

The ministry states: “As a result of reviewing [Aero K’s] plan for [ensuring] financial soundness including the paid-in capital increase plan submitted by Aero K [to the relevant authorities], it was evaluated that additional capital expansion (more than W10 billion) in progress and sales after the commencement of operation could cover operating expenses such as labour, lease and maintenance for a certain period of time.”

MOLIT adds: “In order for Aero K to [become] a competitive airline, the role of local governments and other communities is also very important.”

The start-up placed an order for eight A320ceos in March 2017 but eventually cancelled most, months after its application for a business licence was rejected at the end of 2017.