SITA’s chief executive of airports and borders David Lavorel tells FlightGlobal how the pandemic led to a reprioritisation of technology investments, focused on supporting the recovery but still with an eye on longer-term gains

The reactivation of parked aircraft and the repopulation of desolate airport facilities may be the public-facing images of the air travel recovery from Covid-19, but a new-found appreciation for often-unseen technology is underpinning the reopening of markets.

For air transport IT specialist SITA, that means stakeholders are showing enthusiasm for solutions with immediate and longer-term benefits – despite the financial pressures faced by the sector.

“The pandemic has helped to wake up boards and executives to the importance of technology,” says SITA’s chief executive of airports and borders – and interim company chief executive – David Lavorel during a late-January interview. “The crisis has put a lot of financial strain on the industry and hence has pushed people to be more open to new ways of working and more disruptive approaches.”

Crucially for a heavily indebted sector, he suggests, “this is very much about helping the industry do more with less”. 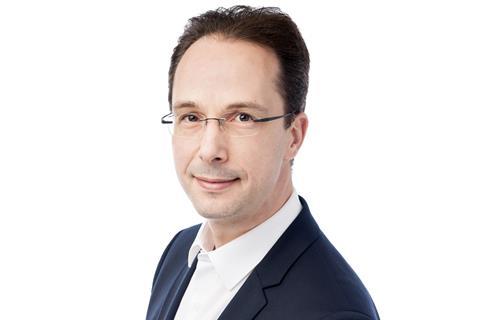 With that mission in mind, SITA has been emboldened by shareholder support to largely retain its investments in product development over the past two years.

“Consistently throughout the crisis our shareholders have supported us to maintain investments, because from the start of the crisis we took a view that the industry was going to recover and we had a sense that technology would be important for that,” Lavorel explains.

It is also an unavoidable truth that few airlines or airports have navigated the past two years without a wholesale review of capital spending plans, with some emerging from the worst of the crisis as structurally smaller concerns. As a result, SITA saw industry spending on technology drop during 2020 and 2021, prompting a prioritisation of uses for the money that remained.

“In terms of prioritisation, everything was geared towards supporting the recovery, especially by way of passenger experience,” Lavorel states. “We’ve seen airlines and airports wanting to rebuild the trust that a passenger could travel and make that as pleasant as possible.

“The ambition is to make it potentially less risky to flow through an airport than go to a supermarket,” he adds.

That has meant spending relating to the introduction of seamless and – wherever possible – touch-free air travel has been prioritised, alongside areas including digital health credentials, with spending on “operational” technology and the expansion of infrastructure both suffering deprioritisations, in the short term at least.

Helpfully, with SITA expecting technology spending among airlines and airports to increase in 2022, the theme encompassing most of today’s in-demand technology advancements – including seamless and touch-free travel – is by no means a new one for the IT specialist.

SITA has long had a focus on the digitalisation of the sector, and today the topic is “centre stage” for many businesses, ”no differently to how it is in our lives outside the industry”, Lavorel says.

Having recognised the potential operational and financial benefits of investing in such trends – and having had the likely positive impacts amplified by the challenges endured over the past two years – “almost all of our customers have a digital transformation goal at this stage”, he states.

In practical terms, one aim of digitalisation is “to come closer to customers with mobile phones”, Lavorel says, adding: “As an example, pushing the check-in experience to homes.”

SITA has also developed a technology called Flex, ”which will enable your mobile to interact with the infrastructure at the airport”, he states, including through functions such as printing directly to check-in kiosks, for example. 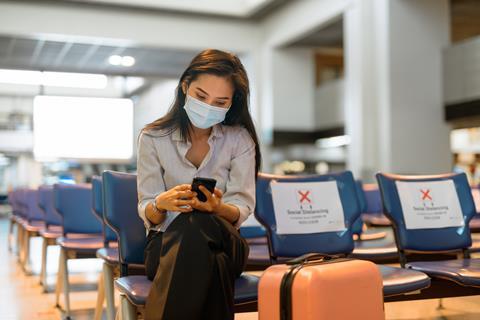 Mobile phone technology is at the heart of digitalisation efforts

Lavorel further highlights SITA solutions relating to lost luggage, which give passengers “the ability to report on the same service basis [on their mobile phones] instead of going to the ground-handling office”.

Digitalisation is also a big theme in aircraft cabins and cockpits, based around increased use of mobile applications for previously paper-based processes.

Health management is another area that has shot up the digital transformation agenda for airlines and airports over the past two years – notably “how we move away as much as we can from this paper industry”, Lavorel explains in reference to the myriad ways in which travellers can prove their vaccination statuses.

“We’ve seen a flurry of those travel apps because of Covid – it’s been a huge driver of the industry and it created a chaos, to be honest, because… there are almost as many Covid and travel apps as there are carriers and countries,” he states, noting that SITA has launched a product called Health Protect, aimed at tackling the problem.

As an enabler of seamless and touch-free journeys, biometrics is another area that has seen intensified interest amid the pandemic.

“The news from 2021 is we’ve also seen demand and interest from regional and domestic airports,” Lavorel says of biometrics, as facilities beyond the big hub airports increasingly see potential benefits from related investments.

He cites the large-scale use of biometrics technology at Beijing Capital airport as evidence that SITA already has “technology that works”.

Lavorel further cites a recent trial at San Francisco airport, where drivers’ licences were used for biometric identification, expanding the technology’s use beyond passports.

Away from the passenger-facing side of SITA’s work, Lavorel highlights blockchain as another disruptive factor that is of growing interest to the industry.

“We launched an initiative on the MRO side of the business where there is the tracing of maintenance activities and the movement of parts, which is extremely important,” he says.

“Blockchain has enabled businesses to put aside worry about the ease of transactions, traceability and security, to focus on the value-add of opening up the environment for smoother exchange of goods and services,” Lavorel explains.

Furthermore, SITA is focused on a longer-term – and arguably existential – challenge for the airline industry: sustainability.

Aside from the ethical and potential cost-saving advantages of acting on sustainability, Lavorel notes a growing trend of lenders requiring “more and more green credentials” from companies – a critical consideration for a sector that has been hit hard financially over the past two years.

With SITA itself certified as carbon-neutral already, Lavorel acknowledges that the road to the air transport industry achieving net-zero carbon emissions by 2050 is a challenging one.

But while some developments will require technological breakthroughs outside SITA’s control, smaller steps driven by technology are already possible.

“Our belief is that we need to act now,” Lavorel says. “We know that the industry can reduce about 10% of their emissions through operational efficiency and actioning some tangible levers.”

“We have software solutions which cost in the range of $1,000 per month that can help you save a little shy of 1% [of fuel],” Lavorel observes, contrasting that with the multi-million dollar investments airlines make into new aircraft.

“We have a product that optimises departure sequencing and helps decide when you start up an [aircraft] engine. And the other is we partner with a company called Envision Digital to bring energy-consumption optimisation at the airport.”

More broadly, SITA’s long-term technology vision encompasses themes such as the integration of eVTOL operations into airline and airport operations, and using augmented reality to get more out of space-constrained airports, with Lavorel describing metaverse-style solutions.

He also describes “the evolution of the passenger becoming more intelligent” through data collection at more points along the way.

“Data is at the heart of what is going to happen,” he says.

SITA also believes in the vision that “your face can become your boarding pass”, Lavorel states. 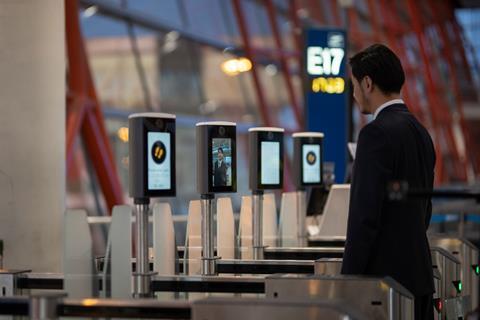 Biometrics are key to the touch-free journey

And for immigration control, the ambition is “a kind of video tunnel you would walk through upon arrival and there would be technology that would enable border agents… to identify people to whom they want to talk, so the flow would be much more natural”.

For now, though, SITA can rest assured that investment is returning as international travel regains momentum.

“From a travel perspective the industry has started to adapt and knows better how to cope. It’s not perfect, but the industry has normalised a little bit… and we believe that we are heading towards living with the virus.”

As that plays out, Lavorel is confident that SITA is positioned to deliver value from investments in technology, from its unique perspective as a industry-owned business.

“If everybody tried to tackle the problem, it is always going to be much more expensive and slower than if people like us do it,” he concludes. “We have a worldwide view and so can very quickly bring experience from one place to the other.”

The upending of the industry over the past two years has changed the dynamics among stakeholders who might look for SITA for help.

”A big learning point for us from the pandemic is the stark difference between the long-haul recovery and that seen for short-haul and domestic services,” Lavorel says.

“According to [our data], the airport in Europe that opened the most new routes in 2021 was Santorini in Greece,” Lavorel explains. “Normally I would expect Frankfurt or Heathrow to be leading the pack in terms of dynamism and market share, but that was Santorini really exemplifying the recovery towards those smaller regional players.

“Some of those mid-size airports and carriers were not necessarily equipped or having the investment to cope with that sort of recovery,” he continues. “On our side, it is an opportunity to help and we needed to adapt a portfolio that was sometimes geared more towards supporting the long-haul, large hubs part of the business.”