TUI’s German airline operation has selected Dusseldorf as a base for a planned long-haul operation with Boeing 787s.

In November 2019, TUIfly disclosed its intent to launch long-haul flights with an initial two 787-8s in the winter 2020-21 season.

Starting in November, the two aircraft will be used on routes to Mexico and the Dominican Republic, TUIfly says. A precise schedule is to be finalised over coming weeks. 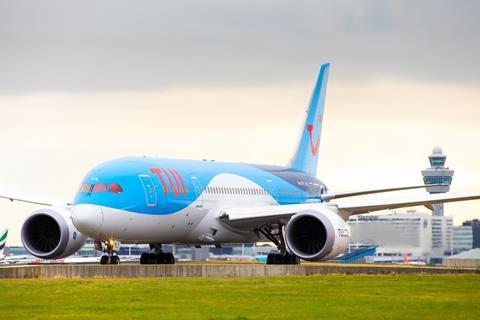 TUIfly has plans to grow its long-haul operation during the winter 2021-22 season, Lackmann says. But alluding to the demise of Thomas Cook, Monarch Airlines, Air Berlin and other carriers in recent years, he adds: “If capacities were to be reduced in the coming months due to further market changes, we can also implement our planned fleet expansion more quickly.”

Following Air Berlin’s collapse in 2017, Lufthansa’s low-cost subsidiary Eurowings and Thomas Cook’s German subsidiary Condor – which continues to operate today as an airline in its own right – expanded their presence in Dusseldorf and launched long-haul flights from the city to destinations in North America and the Caribbean.

In 2019, Lufthansa disclosed a plan under which Eurowings would concentrate on single-aisle operations while the parent took control of the budget’s arm long-haul routes. However, Lufthansa still intends to use the Eurowings brand for long-haul tourism routes.