United growth plan shows no sign of letting up in 2019

United Airlines is prepping for another year of aggressive domestic capacity growth in 2019, hot on the heels of its successful expansion this year.

The Star Alliance carrier loaded the latest network additions from its Chicago O'Hare, Denver, Los Angeles, Newark, San Francisco and Washington Dulles hubs over the weekend, part of a strategy to recapture its "natural share" of the US market by growing 4-6% annually through 2020.

“With more than 40 new domestic routes added this year, we remain committed to expanding our network to offer customers even more choices in their travel destinations,” says Ankit Gupta, vice-president of domestic network planning at United. “The expansion to Hilton Head Island from three of our hub cities and the introduction of New York’s only nonstop service to… Pensacola, are just some of the ways we are responding to customer interest and demand.”

The growth plan, which was first questioned by Wall Street, began producing results in the second quarter. Domestic passenger unit revenues grew 1.7% on a 7.4% increase in capacity, with analysts praising the results despite missing its pre-tax margin target by a point due to fuel costs.

"United’s results appear to add credibility to its midcontinent hub strategy," said JP Morgan analysts in July report. "We supported (and continue to support) the plan as rational and necessary for United’s longer-term margin and market share strategies." 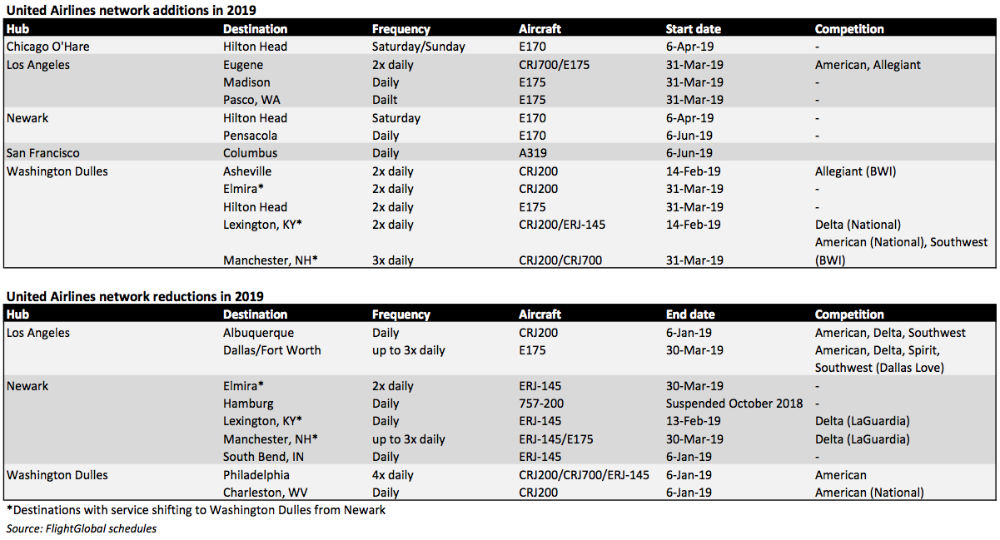 “We look forward to continuing to work with our partners at United Airlines to grow their Dulles International hub," says Yil Surehan, vice-president of airline business development with Dulles operator the Metropolitan Washington Airports Authority. Passengers from Asheville, Elmira, Hilton Head, Lexington and Manchester are able to connect to more than 135 destinations globally via the airport on United, he adds.

The Elmira, Lexington and Manchester routes will shift from Newark, where they end the day prior. United made a similar change to its service to Chattanooga, Ithaca and Wilkes Barre/Scranton this year.

"Dulles… is a great connecting hub for us," Gupta told FlightGlobal in June. "We want to position Dulles as somewhere you can travel from across the globe… but also be able to connect to from all up and down the East Coast."

United will also end service between Dulles and both Charleston (West Virginia) and Philadelphia on 6 January, schedules show.

Los Angeles will see new twice daily service to Eugene with CRJ700s and E175s, daily service to both Madison (Wisconsin) and Pasco (Washington) with E175s from 31 March, schedules show. United will end service to Albuquerque from the airport on 6 January, and to Dallas/Fort Worth on 30 March.

Newark will gain new Saturday-only service to Hilton Head from 6 April, and daily service to Pensacola from 6 June, schedules show. Both routes will be flown with E170s.

The airline will suspend service from Newark to South Bend (Indiana) on 6 January, as well as the three destinations that shift to Washington Dulles. The airline will not resume seasonal service to Hamburg, Germany, in 2019 either.

These route additions follow a number of previous domestic announcements for United in 2019. These include new service from Denver to Charleston (South Carolina), Eureka (California), Flagstaff (Arizona) and Sonoma County (California).

United's 4-6% capacity growth plan for 2019 is well ahead of competitors, with Delta Air Lines saying last week that it plans to grow by roughly 3% with the majority of that from international expansion.