United Airlines is adding more than 60 mainline flights per week at its Denver hub, the latest step in an effort to capture more connecting traffic over the mid-continent gateway.

The Chicago-based carrier will restructure its schedule at Denver International airport on Thursday, 14 February, as part of a process known as "rebanking". The move will see more arriving and departing flights clustered together in defined "banks", with the busiest bank at roughly 09:00 handling 57 mainline flights.

"Rebanking provides enhanced flexibility for our customers and increases connection opportunities which ultimately provides greater access to more destinations," the airline said of the new schedule in a newsletter to pilots on 6 February. The new schedule includes 64 additional weekly mainline flights, it adds. 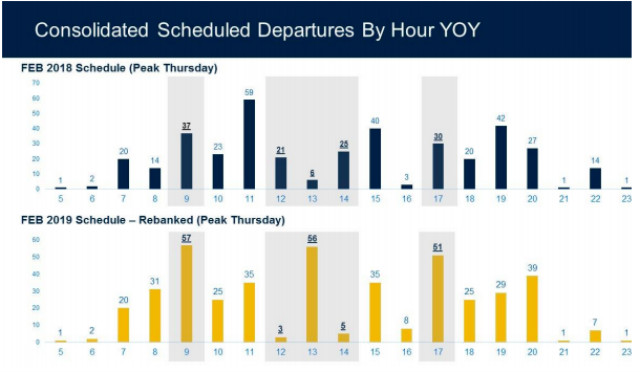 The changes in Denver are just the latest piece of United's mid-continent hub strategy. Since January 2018, the carrier has accelerated domestic capacity growth with a focus on adding connections over its hubs in Chicago, Denver and Houston to capture what its executives see as its "natural share" of the US market.

Andrew Nocella, chief commercial officer of United, said this January that potential connections are up 12% at the three hubs under their rebanked schedules. Chicago schedules were adjusted in February 2018 and Houston schedules in October 2017.

"We're pretty optimistic about It," he said on the performance of Denver following the rebanking. However, he added that United still has a "long way to go" to realise the full benefits of its mid-continent growth strategy.

Nocella should know the benefits of rebanking. In his former role as senior vice-president of network planning at American Airlines, he oversaw similar projects at that carrier's Chicago O'Hare, Dallas/Fort Worth, Miami and Philadelphia hubs after its merger with US Airways in December 2013.

JP Morgan analysts, in a January report, said the strategy is "highly rational for United’s competitive positioning" and produced positive margin growth in 2018.

Adjusted pre-tax margins at United expanded a percentage point to 7.7% in 2018.

Denver is ground zero for United's mid-continent growth. Capacity at the hub jumped 9.7% year-on-year in 2018 – more than twice as fast as its growth at Chicago O'Hare and two points faster than at Houston Intercontinental – and is scheduled to increase another 12.2% this year. 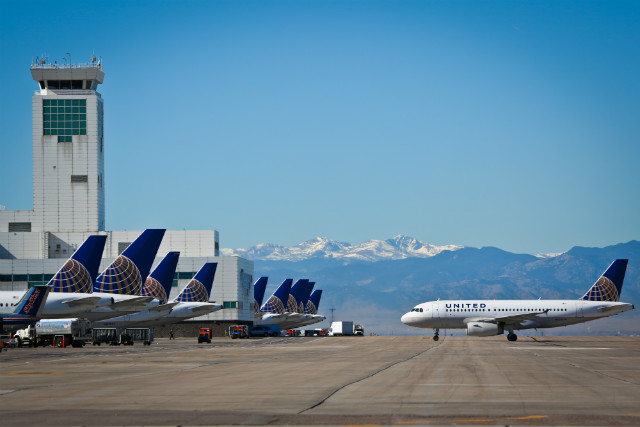 The airline has added a plethora of new routes from Denver, including to Charleston (South Carolina), Eureka (California), Flagstaff (Arizona), London Heathrow and Sonoma (California). Everett (Washington) and Frankfurt are among new destinations it will add this year.

Denver airport is in early innings of a $3.5 billion expansion programme to keep up with this growth. It will add 11 mainline-aircraft-capable gates to concourse B for United (though some will replace existing regional gates), reconfigure the terminal, and it added more trains between the terminal and concourses.

However, one benefit of its rebanked schedule is that United can, at least in theory, better utilise its existing footprint at the airport by adding banks during current periods of lower aircraft activity during the day.

For example, the carrier is considering this at its Washington Dulles hub where it operates only four daily banks. Kirby said last August that United is eyeing additional banks at the airport during off-peak times to improve north-south connectivity along the US East Coast.