The US Department of Transportation (DOT) has tentatively approved a joint venture application by Delta Air Lines and Canada’s WestJet for transborder travel, under certain conditions.

The agency says on 23 October that in light of the downturn in passenger commercial air traffic due to the coronavirus pandemic, antitrust immunity (ATI) for the joint venture would be appropriate to help the industry back on its feet. 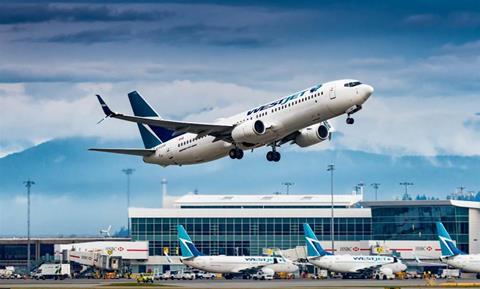 “The Department recognizes that, despite the unprecedented market turmoil, ATI under the current circumstances may help the Joint Applicants during the recovery period, and the Department intends to monitor the long-term effects of the proposed alliance closely through its oversight process, annual reports, and the proposed five-year review to determine whether the alliance has produced public benefits that outweigh any reduction in competition,” the agency writes in a show cause order.

In its ruling, the DOT adds that the proposed immunized alliance “is unlikely to materially harm competition in relevant markets” and is in the public interest. Benefits include “added capacity and a more robust secondary competitor that could potentially invigorate competition in transborder markets.”

With the approved joint venture, the two carriers would have a combined 27% share of scheduled US-Canada transborder traffic, with Air Canada, the country’s largest carrier, still dominating the market with 45%, the DOT says.

Contacted for their reaction, both Atlanta-based Delta and Calgary-headquartered WestJet say on 23 October that they have received the order and are currently reviewing it.

The two airlines finalised their plans for the joint venture in July 2018 and applied for the antitrust permission later that year. They secured Canadian competition bureau approval in June 2019.

The DOT approval expands the carriers’ codeshare agreement to allow them to coordinate schedules and pursue additional network expansion. They will also be able to co-locate at airports, among other joint activities.

Delta and WestJet have had a code-share agreement since 2011, but argued in their application that future growth was limited as the two carriers “remain competitors with no incentive to divert traffic from their own flights.”

The antitrust immunity does not extend to WestJet’s wholly owned ultra-low-cost carrier Swoop. Including Swoop in the joint venture “raises competitive issues”, the agency says in its ruling.

“Swoop’s business model is deliberately designed not to operate within a comparably complex and cooperative immunized joint venture in which airlines link their networks, and jointly manage the planning, pricing, marketing, and yield management of traffic across their combined networks,” the DOT says.

In addition, the airlines must sell 16 slots at space-constrained Laguardia airport within two months of the final order. US competitors Spirit Airlines, Southwest Airlines and JetBlue had opposed the joint venture without the slot divestiture. The slots must be sold as a package in a blind auction and each slot must be within 30 minutes of a current WestJet Laguardia allotted slot time.

Travel between the two North American neighbours has sharply declined since the coronavirus pandemic began earlier this year. The longest peaceful border in the world has been effectively sealed to non-essential travel since 21 March. After several extensions, it is now scheduled to re-open on 21 November.

Canadian government-imposed quarantine orders and other provincial travel restrictions, in addition to the lack of a sector-specific government support programme, have severely hindered the air transport industry’s recovery in that country.