Virgin Trains USA plans to partner with airlines to offer seamless connections to travellers when its extension to Orlando International airport opens, the country's first in-terminal long-distance rail connection at an airport.

The private rail operator, previously known as Brightline, plans to enter into interline agreements with JetBlue Airways and other major airlines via Orlando to facilitate transfers, Virgin Trains chief commercial officer Ravneet Bhandari said in a roadshow presentation for a $1.5 billion bond to partially fund the project on 20 March.

"We intend to have interline agreements with all major airlines to seamlessly move passengers across our network," he says.

JetBlue, commenting on any potential interline partnership with Virgin Trains, says that they are "always looking for options to add even more convenience for our customers" without providing further details.

Virgin Trains will serve a station in Orlando airport's under construction South Terminal when service from South Florida begins in the third quarter of 2022. JetBlue will anchor the terminal, which will also handle Spirit Airlines' international flights, when it opens in 2021. 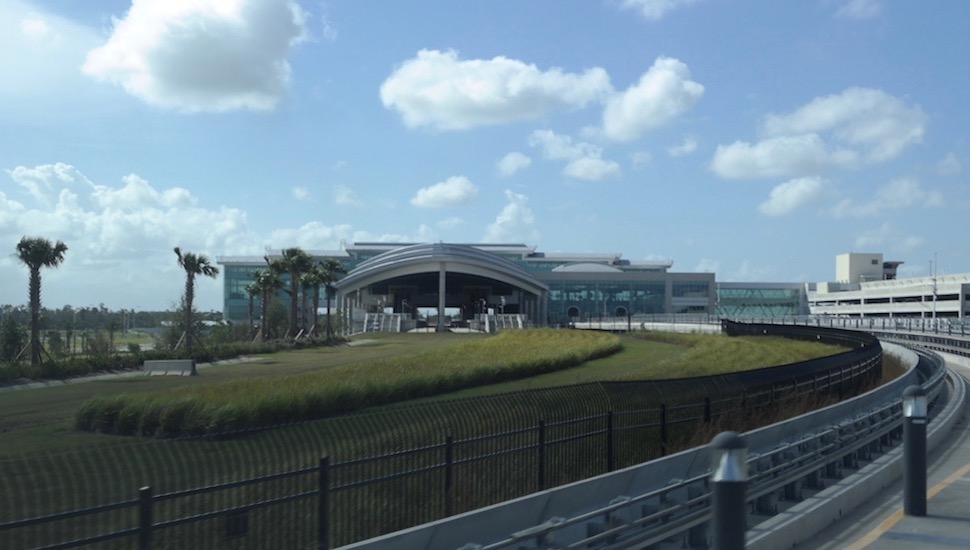 Orlando airport's South Terminal, Virgin Trains will operate through the open centre of the facility

The in-terminal connection will be the first in the USA, where existing long-distance airport-rail connections require passengers to ride either a bus or tram between the airport terminal and rail station.

Airline partnerships with long-distance rail operators is common outside the USA. Air France, KLM and Lufthansa all sell connections between flights and long-distance trains at their respective Paris Charles de Gaulle, Amsterdam and Frankfurt hubs on their websites, for example.

In the USA, United Airlines sells itineraries with connections to Amtrak at its Newark hub. However, the Newark Liberty rail station is only connected to the terminals via a tram.

Southwest Airlines handled nearly a quarter of the airport's traffic, followed by Delta Air Lines with a 14% share and JetBlue with a 12.2% share, Cirium schedules data shows.

Virgin Trains also hopes to connect with airlines at Fort Lauderdale-Hollywood International airport in the future. The railroad, which operates trains between Miami and Palm Beach with a stop in Fort Lauderdale, is in "active negotiations" to build a station at the South Florida airport, says Bhandari.

"Our corridor is inside the airport fence and, in fact, our tracks run directly under the runway," he says. "This a very logical station site for us."

Fort Lauderdale airport was not immediately available for comment on the discussions.

JetBlue is the largest carrier at Fort Lauderdale, with a nearly 24% share of the 33.1 million passengers that passed through the airport in 2018, schedules data shows. Southwest is second with a 21.7% share and Spirit Airlines third with a 21.1% share.

Bhandari adds that Virgin Trains is in discussions with American Airlines, JetBlue and Southwest to offer "park, check-in, take Lyft for the last-mile" packages that allow passengers to take trains to nearby stations for travel to and from Miami and Fort Lauderdale airports. 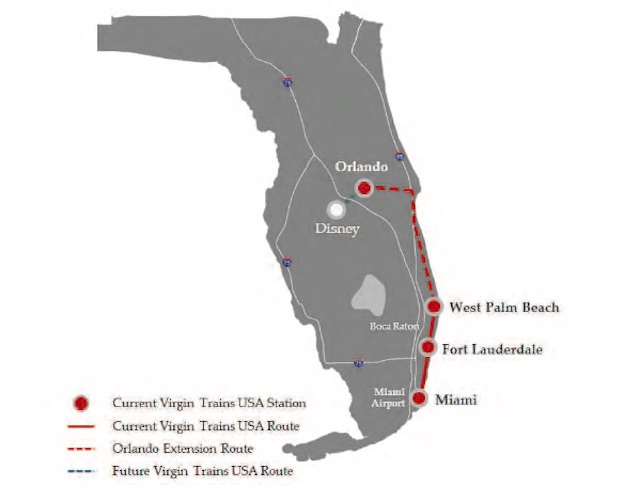 When work is completed, Virgin Trains expects trips between Miami and Orlando to take 3h 15min, the roadshow shows. Future extensions to Disney World and Tampa west of the Orlando airport are being planned, says Bhandari.

The rail line will be "faster and it's cheaper" than existing air and road options, Greater Orlando Airport Authority executive director Phil Brown said of Virgin Trains' plans in an interview with FlightGlobal in October 2018.

Virgin Trains will compete with existing air service between Orlando and both Fort Lauderdale and Miami. Silver Airways, Southwest and Spirit fly the Orlando-Fort Lauderdale route, and American the Orlando-Miami route, schedules show.

Updated with comments from JetBlue.