Adient Aerospace – the joint venture between Boeing and automotive seat maker Adient – has secured its first customer, a year on from unveiling its first product at the 2018 show and six months after formally launching as a business following regulatory approval.

The company is announcing at AIX 2019 today that Hawaiian Airlines has selected the Ascent lie-flat business class seat for its 10 on-order Boeing 787-9s, which are scheduled for delivery from 2021. Adient showed the seat to selected customers last year in an invitation-only area of its stand at AIX. 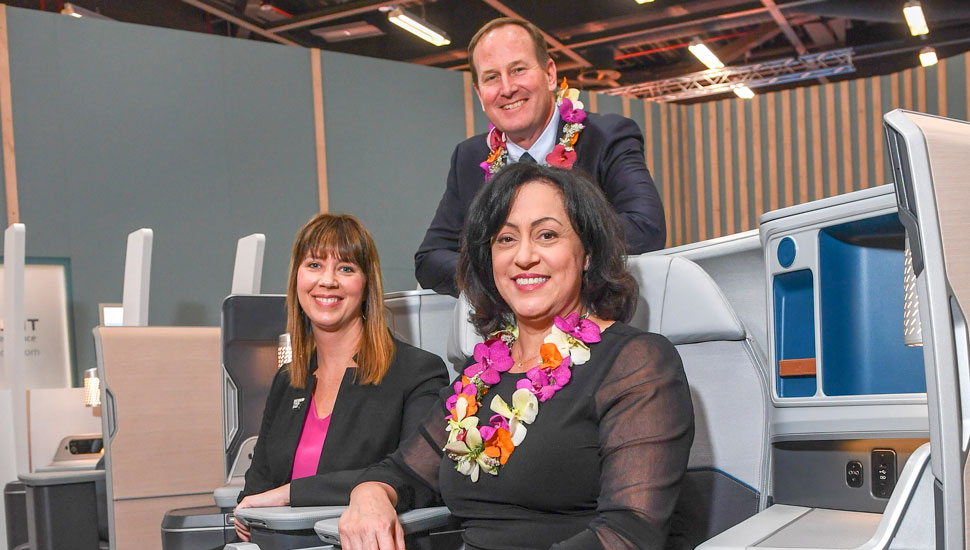 Although the island carrier is not yet revealing the configurations of its new Dreamliners, it says it opted for the Ascent because the product's "customisable design" was more suited to its leisure-oriented premium cabin market.

Hawaiian's senior vice-president of marketing Avi Mannis says the airline's requirements are very different to those of most other airlines because such a large proportion of its business class travellers are flying to or from vacation.

"The challenge for us is that we are in a leisure market, and most lie-flat seats are designed for business travellers," he says. "Our demographics are very different, with more honeymooners and other couples, and often children."

The airline looked for a product that offered "flexibility with partitions that allowed passengers to create private or shared experiences", he adds. "We even looked like the positioning of controls so they were suitable for a wider range of guests. That's why a new to market product, that we could customise, suited us better."

Hawaiian is reluctant to talk about configuration until it concludes negotiations with its proposed suppliers of economy and economy-plus seating, as well as its in-flight entertainment, but its 24 Airbus A330-200s are configured with 278 seats, 18 of them lie-flat and 68 "extra comfort", which provide 5in of additional legroom.

While it uses 20 Boeing 717s for its inter-island flights, Hawaiian's long-haul services range from 5-6h – to the US West Coast – to around 11h, to Australia and New Zealand. The airline also has 12 A321neos, which it uses on West Coast routes, and holds options on another six.

Mannis says the entire cabin product is aimed at creating an "immersive sense of Hawaii from the design of the monuments to the music you hear as you board. We want our passengers to feel their holiday has started and get in a vacation state of mind long before they land."

"At this stage, it's a concept and we want to test the market and get customer feedback, but we feel it could be our next production product," says chief executive Alan Wittman. "It's a relatively small but growing market, but, with airlines flying longer routes on single-aisle aircraft, we feel it could be significant enough to warrant the investment."

He adds: "While some airlines have looked to traditional products on the market, these tend to be optimised for widebodies, which means there are dimensional compromises."

Adient Aerospace has opened a factory next to an Adient automotive seating campus in southern Germany, has set up its production process and is building its first test article seats, says Wittman.

He says Boeing invested in the venture because "we were getting a push from our customers about levels of choice and capacity". However, although Boeing is a partner, he says the business will be "OEM agnostic" and has gone through "a thorough anti-trust process as an independent firm competing in the BFE [buyer furnished equipment] market".

Adient has entered into a joint marketing agreement with another seating manufacturer in which Boeing has invested, LIFT by Encore, and will be exhibiting a prototype of the Californian company's 737 economy seat on its stand at AIX 2019.