Now in its 12th year, the Crystal Cabin Awards proved as big an attraction as ever as the industry’s "Oscars" set a new record of 91 entries. Once again, the ballroom of the Hotel Atlantic Kempinski provided the backdrop for a sparkling ceremony to celebrate the latest ideas designed to improve the passenger experience.

For the first time, an award was made for Inflight Entertainment & Connectivity (IFEC). Taking home the prize was Bluebox Aviation Systems, which – in co-operation with launch customer Virgin Atlantic – developed its own IFE platform with onboard entertainment for the visually impaired. 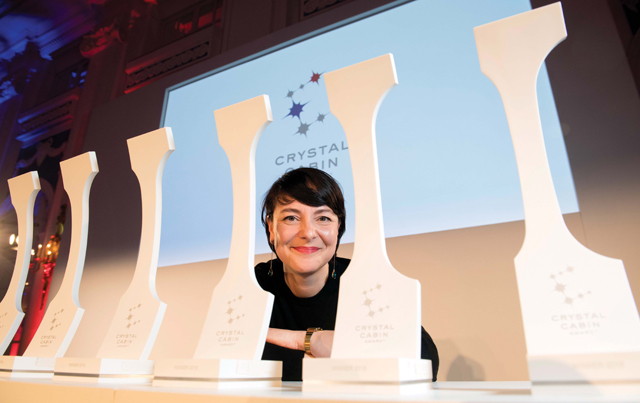 Design house PriestmanGoode, together with Qatar Airways and Rockwell Collins, won the Cabin Concepts category for the Qatar Airways QSuite. This uses a simple mechanism to reposition four business class suites around a table for eating and socialising.

The award in the Cabin Systems category brought a second award to Rockwell Collins for its bowed partition wall, Silhouette MOVE. The wall used to separate business and economy class allows the economy passenger sitting behind it enough legroom and space for cabin baggage.

The “Greener Cabin, Health, Safety and Environment” category was taken by Villinger for its “LiteHeat” heated floor panel, which ensures that foil or cable-wrapped heated floor elements – often extremely sensitive – are reinforced to become effectively indestructible.

Airbus and Altran took the Material & Components category for their Printed Electrics process, which could eliminate the need for cable harnesses for cabin electronics by using directly printed wiring. The technology was jointly developed in Hamburg’s ZAL TechCenter.

Rockwell Collins took its third "gong" of the night in the Passenger Comfort Hardware category. Its Valkyrie Bed for premium business class offers a seat and bed thanks to a roll-up mattress that can be drawn across the seat from the wall panel.

Spain’s Renacen won the Visionary Concepts category for its 3D Seat Map VR app, which presents passengers with a virtual 360° view of the cabin during the booking stage.