Seat maker Recaro says it is close to announcing a launch customer for its latest business class product, one of three lines it is revealing at the show.

The German company – which is the market leader in economy, but has ambitions to raise its share in the premium segment – has made several tweaks to its established CL6710 seat, the “new generation” version of which it is showing in concept form in Hamburg. 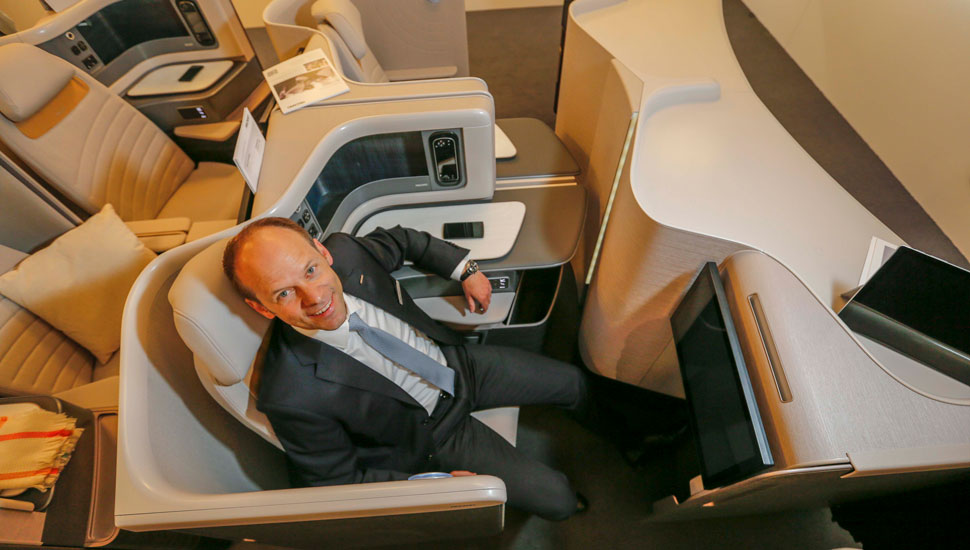 New features include a larger stowage area and, for the first time, a sliding door. The monitor is also slightly further away, increasing the passenger’s personal space.

Despite this, Recaro has reduced the weight of the unit compared with its predecessor by around 10% to less than 90kg, using a greater number of composite materials manufactured by its own South African subsidiary, says chief executive and shareholder Mark Hiller.

“At the moment the seat is still at concept stage, and how it ends up depends a lot on the feedback we receive at the show,” he says. “But we would hope to be working with a launch customer by the end of the year.”

Recaro is also showing its SL3710 entry-level economy seat, which is intended to replace its established SL3510, and Hiller hints that Wednesday could reveal a customer for the product. The fixed-recline SL3710 is more than 1kg lighter than its predecessor and optional features include a cup holder, power supply and advertising frames.

Although passengers are not able to adjust the recline angle, this can be done by the airline’s maintenance team overnight, increasing the versatility of the product, says Hiller.

The final product being shown is a new version of the upscale economy product, the CL3710, which features new additions to aid sleep, such as a headrest that is adjustable in six heights, and includes wrap-around side supports that can be turned at right angles. Hiller says the patented addition, which is dubbed “Abrazo” – Spanish for “embrace” or “hug” – might “replace the neck supports passengers bring on board”.

The new C3710 also has a lumbar support and an additional cushioned ledge to support thighs, controlled by a button.