Boeing has published further preliminary details of the 777-9’s configuration, three years ahead of entry into service, revealing a slightly lower aircraft with an interior resculpted to carve out a precious 10.2cm (4in) of internal diameter.

A 79-page document posted on Boeing’s website offers the first detailed update on the larger 777X variant's dimensions since a brochure version appeared in 2015.

Boeing released both documents to help airport managers prepare for the arrival of the stretched widebody with its extended wingspan.

Compared with the previous iteration, the update shows the 777-9’s designers have made a few minor tweaks. For example, the height of the vertical tail above the runway is about 17cm shorter, although remains nearly 1m taller than the height of the 777-300ER.

The most critical dimensions for the 777-9 remain unchanged, with a 2.9m-longer fuselage and 7m-wider unfolded wingspan compared with the 777-300ER.

Boeing also has worked to make the 777-9 more comfortable with a standard 10-abreast layout in economy class. The 777-300ER originally entered service with a nine-abreast economy cabin, but some airlines now offer 10-abreast layouts. The 777-9 shares an external fuselage cross-section with the 777-300ER, but the internal sidewalls have been carved out by about 10.2cm. 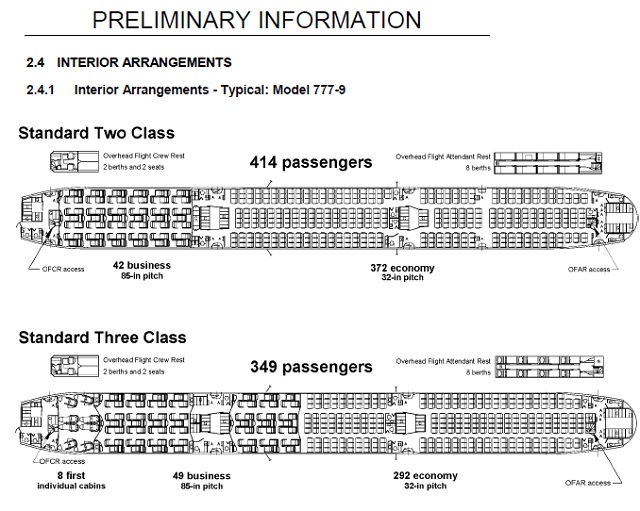