Safran is hopeful that its interiors business is poised for recovery as the year progresses after an “extremely weak” first quarter. 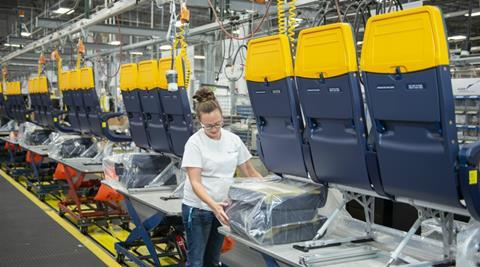 But Bernard Delpit, Safran chief financial officer, told a first-quarter analysts call that the three-month period was expected to be the “the trough in terms of seat deliveries”, especially for business-class products.

Airlines were not cancelling orders, he stresses, but “postponing the timing of deliveries”.

Aftermarket sales of seats and other cabin equipment have also been weak, falling by around 60% year on year, “as airlines have not completely resumed flying”, Delpit adds.

However, revenue is expected to rebound in the second half and through 2022 and 2023, he adds.

Olivier Andries, Safran chief executive, says that although deliveries have been “pushed out at the request of airlines” the number of campaigns for cabin equipment is “pretty active” with “lots of requests for proposals”.

During the quarter, Safran received several seating contracts, including selection by a major US carrier to provide business-class seats for its fleet of on-order Airbus A321XLRs.

American Airlines, Frontier Airlines, JetBlue Airways and United Airlines are all customers for the A321XLR.