By Max Kingsley-Jones in Bahrain

Once the ‘poor relation’ among the region’s booming airlines, Gulf Air’s chief executive is finally restoring its fortunes

While the rivalry between the Gulf’s more recently established airlines has seen them competing with each other for headline-grabbing aircraft megadeals as they pursue unabated growth and global domination, the region’s old guard – Gulf Air – has been quietly rebuilding its business and re-establishing its reputation. 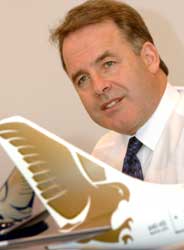 At the helm for this mission is James Hogan, who was appointed chief executive of the Bahrain-headquartered airline in 2002 to oversee the resurrection of a carrier that in its glory days 25 years ago was one of the industry’s benchmarks for service and image.

In the four years since he joined Gulf Air, Hogan says he has “re-engineered the business” and overcome a number of hurdles, not least the recent departure of one of the airline’s three state shareholders – the emirate of Abu Dhabi. What he has created is an airline that has a new-found self-belief but, unlike local rivals such as Emirates and Qatar Airways, has its ambitions in check. “It isn’t our intention to be a global airline,” says Hogan. “We’ll develop a strong regional network over the next three years,” he adds. “We will fly to key long-haul cities, continue to develop our Asian, Indian, Middle-Eastern proposition, improve the connectivity and get the frequency model right.”

The 50 year-old Australian – a former chief operating officer at BMI – has a sales and marketing background in the airline and car rental sectors. His well-honed marketing charm is in evidence as he darts around the airline’s Bahrain headquarters, where he is quick to acknowledge passing colleagues with a cheery “hi” and a smile. But his relaxed outward appearance belies an ultra-competitive man known for his short fuse.

The revival effort came on the back of mounting losses at Gulf Air, the withdrawal of one of its four original shareholders Qatar in 2002 to focus on its home-grown carrier Qatar Airways, and a general decline in Gulf Air’s image as some analysts recommended that the three remaining shareholders – Abu Dhabi, Bahrain and Oman – let the business die.

Last year, the Abu Dhabi government withdrew from Gulf Air to focus on its own new national carrier, Etihad Airways. Gulf Air completed the closure of its hub in the emirate in March and consolidated its operations in Manama and Muscat.

Despite this setback – and events that affected airlines worldwide such as the Gulf war, the SARS epidemic and the Asian tsunami – Hogan and his team have brought Gulf Air back on to an even keel: “Even when the rules changed, we achieved what we said we would and hit the numbers three years in a row,” he says, referring to the targets set in its 2003 three-year recovery plan.

However, after returning to the black with a small profit in 2004, the airline’s recovery has been halted by spiralling fuel costs and Hogan concedes that, when Gulf Air releases its 2005 results next month, it will be back in the red. “But the balance sheet is strong and the company is in good shape – we’ve paid off a considerable amount of debt over the last three years,” he adds.

The fact that the airline has been unhedged for fuel purchases since the end of last year is putting the airline under “huge pressure”, says Hogan: “Fuel has gone from 12% of my costs in 2002 to 28% last year and 31% today.” He warns that “revenue growth cannot keep pace with oil price rises” and things will get worse before they get better as the airline faces “a deficit of BD 80 million [$210 million] in 2006. Last year will be a loss and the fuel price is even higher now, and we’re not hedged,” he says. However, Hogan adds that the shareholders are “giving us the ability to raise cash to offset the exposure on fuel and also to go to the market and create a new hedging programme”.

Hogan’s original recovery plan saw the airline stabilise its network and traffic at around six to seven million passengers annually, upgrade its product and rebrand, and focus on improving yield and revenue per available seat/km. The next three-year plan – dubbed “smart airline, successful business” – was agreed earlier this year and covers a network strategy based on a two-hub operation and a long-term fleet renewal programme. “We’ll probably expand to no more than one more European city, we’ll definitely need to go to China and expansion after that will be in the Middle East,” says Hogan.

The airline’s long-running fleet renewal evaluation is at last poised to bear fruit, says Hogan: “We’ve got 34 aircraft, but too many types – Airbus A320s, A330s, A340s and Boeing 767s. The board has given us approval to replace our nine 767s, and, over the next 10 years, to change our whole fleet.”

Hogan says the airline is tying in the more pressing requirement of the 767 replacement, due to be announced imminently, with the entire renewal programme. “We’re evaluating the A320 versus the 737 and the A350 versus the 787 – and we’re prepared to go all-Airbus or all-Boeing if the structure of the deal is right,” he says.

The airline has abandoned any ambitions to acquire regional jets as it seeks to minimise the type count, says Hogan: “If we bring in the right balance of A320s or 737s we can actually meet that regional requirement.” This will see the airline move towards a 50/50 widebody/narrowbody fleet mix over the next 10 years, he adds.

“When I was appointed in 2002 the most important comment by the three owners at the time was: ‘We want to be proud of Gulf Air again,’” says Hogan. “Today, the two [remaining] owners are certainly proud of Gulf Air.”