I have had a super summer in 2009 display-flying the world's only airworthy Avro Vulcan bomber - an aircraft I first got my hands on in 1971 as a co-pilot at RAF Waddington with 44 Sqn. I went on to do a tour as a captain and later had the honour of taking the aircraft into battle during the Falklands War in 1982, on Operation Black Buck.

Since leaving the Royal Air Force I have had a series of airline flying jobs, most recently on the Boeing 767 with Zoom. I had hoped to fly for Zoom until I retired at 65, but unfortunately it folded in 2008.

I had a job offer from Thomas Cook this year, which I did not accept as at the time I was the only qualified Vulcan display pilot available. So I ended up having a fantastic summer because I flew the delta bomber on 28 occasions and only missed one 2009 display.

At the start of the 2009 season the usual crew was myself in the left-hand seat, former RAF Vulcan Display Flight (VDF) co-pilot and Panavia Tornado GR4 pilot Kev Rumens in the right-hand seat and ex-VDF air electronics officer (AEO) Barry Masefield in the back.

Phil Davies is another ex-Vulcan AEO who flew some displays. Later, Kev Rumens qualified as a display pilot, sharing the "onerous task" when he was available on his Virgin Atlantic roster.

The hardest feature of displaying the Vulcan is not the flying of it, but keeping yourself correctly positioned. The view through the cockpit windows is a little like looking through a letter box, and you cannot see across the cockpit so if you are running in with the display centre on the right you need the other pilot to call "two, one, now" because you cannot see it. Similarly, when making a right turn you need him to tell you to slacken off or increase the bank as you are coming round.

This can make displays where there are operating restrictions more of a challenge. At the Silverstone racing circuit, for example, we were not allowed to over-fly the Porsche centre, which meant we had very little room to get back on the display line when manoeuvring and I was relying entirely on the guy in the right-hand seat to give me the calls as I never knew whether I was over it or not. 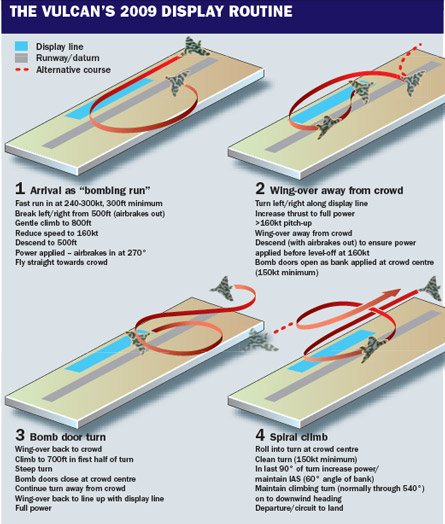 XH558's cockpit differs from the Vulcans I used to fly in the RAF in that the old military flight system is replaced by a Bendix-King "artificial horizon", and there are new LCD compasses. The radio altimeter and machmeter have gone and a Garmin GPS receiver occupies their place on the instrument panel.

The AEO is responsible for reading the checklist, and most of the radio calls, which keeps him busy, and he also monitors the flight using the instruments in the rear.

In RAF days the nav plotter, who was one of the Vulcan's three rear crew during its operational service, was very involved in the display calling speeds and heights etc. But we have not been doing it that way in XH558, as all our pilots are airline flightcrew, so we are used to the routine of monitoring and talking to each other. We rely on the AEO to observe and just call us when we are below a certain target speed or height.

Although the Vulcan's two pilots sit on Martin Baker ejection seats, the AEO's only means of escape is to bail out through the crew hatch that is right in front of the nose gear leg.

The gear is hydraulically actuated and in any emergency, such as an engine fire, one of the first drills is "gear-up" for rear crew escape, as if you lose the hydraulics and the gear is down, it stays down.

The type of display we fly varies depending on the venue. We have a standard routine over normal-sized airfields such as Waddington and Fairford, where there are no operating restrictions on heights or no-go zones.

Seaside displays are also usually fairly standard, but at smaller places such as Goodwood, which involves displaying over a racetrack, there are limits, which means we have to modify the routine.

At Shoreham airfield restrictions meant we had to be above 1,500ft (460m) over a built-up area and we had to avoid a school and making noise over a field full of horses. Manoeuvring around these restrictions is not easy in a big aircraft with a large turning circle. The Vulcan goes up very quickly, but does not come down very quickly.

It was wonderful to display at Windermere, but we had to modify the routine because of the terrain. We were unable to arrive at high speed because the radius of turn would have been far too great at 300kt (555km/h) without overstressing the aircraft to get round the hills. We try to limit it to 1.55g.

We also have to modify the display for low cloud. The rules imposed on us an ex-military "permit" aircraft do not allowed us to fly the Vulcan in cloud.

XH558 can carry up to 29,500kg (65,000lb) of fuel and because we always carry a safe amount - mainly for holding -we never operate particularly light.

We have an absolute minimum of 4.5t for landing - the Vulcan's fuel is spread around 14 tanks and the gauging is inaccurate. For the display at the Royal International Air Tattoo at Fairford we carried about 11t, meaning our all-up take-off weight was around 57t.

The delta wing does not have any high-lift devices - pitch and roll control is provided by four large elevons on each trailing edge - which keeps everything simple. The airbrakes above and below the wing have three positions - "in", "medium drag" and "high drag".

For a display take-off, full power is selected and the Vulcan quickly accelerates to 150kt, at which point we rotate into a steep climb. Although the nominal rotate speed is around 140kt, we hold the nose down a bit longer so we can pitch up straight into a steep climb.

We try to conserve the engines, so do not always use full power - sometimes about 90%. There is a critical "resonance band" of 93-96% in which we must not loiter because of vibration so we try to keep the power at either full thrust or no more than 90%.

On rotation we progressively pitch the nose up to an initial deck angle of around 35° and then gradually increase to 45°. This is all done by eye and by feel and monitoring the speed to make sure it stabilises at around 160kt, controlling purely with pitch.

Once airborne, the pilot flying applies the wheel brakes for 4s and calls for the pilot not flying to retract the gear.

Once the gear is up and the take-off checks are virtually all completed, the delta wing configuration means there is no limiting speed, one minimum flying speed and one stalling speed, like a Tiger Moth.

We then position for the start of the routine. Power comes back to 75% on the four RPM gauges mounted in front of the throttles, and we begin descending to position "crowd rear" accelerating to around 250kt.

Last year we never really went above 180kt on any part of the display - meaning that we were flying at the same speed as a Lancaster, but making more noise. This year I decided to start the routine with a low, high-speed run-in to look more like a jet bomber.

For that first run-in we like to fly a curved arrival to show the upper side of the wing to the crowd, descending to a minimum of 300ft. We bring the power back on and accelerate to up to 300kt by the end of the display line.

At the end of the "bombing run" we close the throttles almost to idle and deploy the airbrakes for a level break, turning back in to come head on to crowd centre, with speed reducing to about 160kt.

We then turn steeply on to the display line and open the throttles fully - it takes a few seconds to reach full power - and pitch up into a steep climb to 1,200ft. We are probably climbing at 60°, but as there is nothing on the instrument panel to help us, it is all eyeball and a feet on the horizon job.

We then start a roll away from the crowd and over bank so that the nose starts coming down again. Once it is coming down with the power back to 70%, the speed reduces to around 150-160kt and this, along with the rate of descent, is controlled using light buffet - and sometimes the airbrakes.

We descend to a minimum of 500ft, turning to point at the crowd centre and then reverse the turn to approach the display line for the "bomb-door turn". As we fly past crowd centre with the belly up to the spectators, the PNF calls "bomb doors in: two, one, now", and the AEO in the rear opens the doors.

We fly a 360° turn with 45° of right bank - to avoid the risk of over-stressing the aircraft - during which we climb and descend 200ft so it looks level from the crowd's perspective.

As we come back past crowd centre, on the call "bomb doors - two, one, now" and the AEO makes the selection to close the doors in the back.

We continue the turn through to 60° from the crowd line and then roll off and pull into another wing-over back towards to the display line, pitching up to climb to 1,200ft. Descending back to 500ft, the speed is controlled with buffet/airbrakes. We try to avoid bringing the throttles right back because of the engines' slow acceleration rate.

We fly down the display line and at crowd centre we roll into a bank away from the crowd to make another orbit. As we are pointing at crowd centre, the power is put back on, and the jet is pitched up and the bank increased to 60° for the spiral climb through 540° up to 2,500ft - or higher if it suits the routine.

We then join the down-wind circuit to land. As soon as we want to go down the gear is deployed (the limiting speed we use is 200kt) and with the airbrakes out the Vulcan descends pretty quickly. We effectively fly a glide-approach. The downwind leg is flown with thrust in the "high 60s" - around 68%.

The Vulcan is flown on a speed-stabilised approach at around 160kt until 600ft with medium airbrake selected and the thrust at around 65-66% - we use the higher setting for better engine response. The final approach speed is nominally 140kt and VREF 130kt, depending on the weight. High drag airbrake is used to reduce to VREF.

Once the nose gear is down the wheel brakes are applied and we slow to taxi speed. There is enough pitch control to hold the nosewheels off until about 70kt when landing on a long runway, which looks lovely and means we can slow down with little use of the brakes.

We do not use the parachute brake - it is treated as a emergency device as we have only got three chutes and they cost around £3,000 to be repacked in the tail.