IATA has warned that an escalation in global trade tensions could moderate the strong outlook for long-term passenger and freight demand, but is unlikely to trigger a major crisis for the world's airline industry.

In a recently released research note, IATA Economics says moves towards global trade protectionism are not positive for air transport, however at this stage the impact appears to be minimal.

“The overall scale of the economic damage depends on both the extent and the severity of any tariffs and other restrictions that are put in place,” it adds.

The United States’ tariffs on steel and aluminium have had minimal impact on air freight as those goods rarely travel by air. The 10% tariffs on car parts and semiconductors made in China are of concern as they are goods usually shipped by air. However, the value of most exports into the US of those goods come from Canada and Mexico, and thus the impact on air freight is lessened.

Nonetheless, IATA sees a “key risk” for air freight if an escalated trade war leads firms to reconsider their supply chains, potentially reinforcing the trend of “reshoring” that has been ongoing since the 2008 global financial crisis.

On the passenger side, the Association expects that demand impacts will most likely be driven by lower GDP growth and its impact on incomes. However, its modelling, done in association with Tourism Economics, suggests that passenger demand growth will continue at a slightly lower rate rather than reversing course. 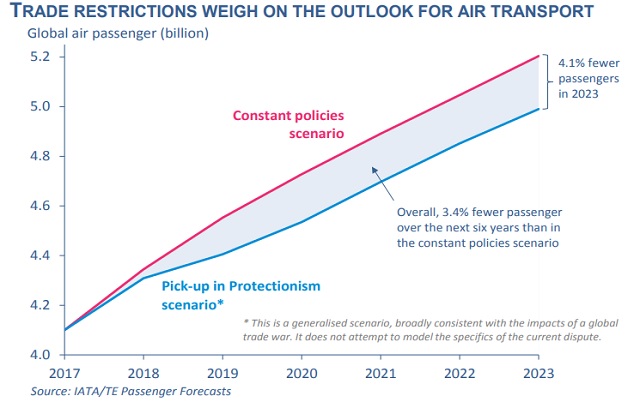 “We would still expect to see ongoing growth in passenger demand over the coming years even in this scenario. However, the losses would add up, with more than 3% fewer passenger journeys expected to take place over the next six years than in the no-escalation scenario,” says IATA.

It adds that if protectionist trade measures slow economic growth, that may also help to moderate oil prices, helping airlines to mitigate against lower demand.

IATA concludes that the overall impact of the current trade war is unlikely to have much impact on the industry, but an escalation could have a material impact on freight and passenger markets. Much of that will rest on which measures are taken, and if it turns from a bilateral trade war into a global one.

“While a full-blown global trade war does not form part of our central outlook, it represents an important risk.”