Turkey's Kalebaykar unmanned air vehicle joint venture has been awarded a contract for 19 Bayraktar mini-UAV systems for the Turkish army for delivery from mid-2007.

The hand-launched, fully autonomous UAV first flew in October last year and is based on almost three years of research and development. Each system will comprise four UAVs and a laptop computer-based ground control station. The order is believed to be Turkey's first for an operational mini-UAV system. 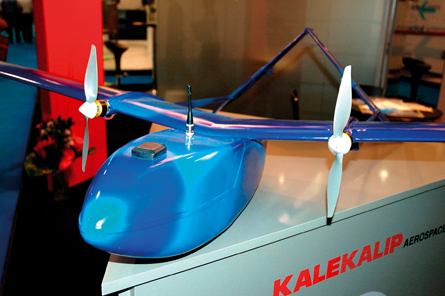 A pre-production prototype was displayed by Kalebaykar at last month's Farnborough air show. The full production version will include a parachute recovery system. The UAV has a span of 1.6m (5ft), a length of 1.2m and a maximum take-off weight of 5kg (11lb) with a 1kg payload. The twin electric engine-powered aircraft has an endurance of 1h.