Seven of the UK’s AgustaWestland AW101 Merlin rotorcraft will receive an initial set of modifications to ensure a continuation of support for the Royal Navy’s Commando Helicopter Force once the service’s last Westland Sea King HC4/4+ transports are retired in 2016.

To be delivered to the RN from 2015, the “Phase 1” aircraft will be among 25 Merlin HC3/3As eventually transferred from the Royal Air Force’s support helicopter inventory as replacements for the aged Sea Kings.

Adaptations will include undercarriage modifications to support ship-based operations, the installation of additional communications equipment and the integration of a powered folding main rotor head, AgustaWestland says.

Initial operational capability in a fully upgraded Merlin HC4/4A configuration should occur in mid-2018, with all 25 aircraft to be adapted to this standard by 2020. Key elements of this “Phase 2” work will include replacing the aircraft’s avionics to replicate the cockpit of the RN’s upgraded multimission Merlin HM2s, fitting an automatic main rotor and tail fold system, and performing full “marinisation” for naval operations.

Announced on 29 January, the Merlin upgrade programme has a total value of £330 million ($546 million). Aircraft modifications will be performed at AgustaWestland’s Yeovil site in Somerset, with the HC4/4A fleet to be based at nearby RNAS Yeovilton. The manufacturer will also be responsible for managing a competition to provide a new synthetic training system for the adapted type.

Sixteen Merlin HC3/3As are currently operational with the RAF, with another 12 in storage, according to Flightglobal’s Ascend Online Fleets database. The latter version – six of which are in use – were acquired for the service from original buyer the Royal Danish Air Force. Once fielded, the HC4/4As will provide the Commando Helicopter Force with greater range, payload and speed, according to AgustaWestland.

The MoD has also awarded AgustaWestland a five-year contract worth around £430 million to provide continued maintenance and support services for the British Army’s Apache AH1 attack helicopters. An extension to its existing integrated operational support (IOS) deal, the agreement will cover activities until 31 March 2019, “ensuring they are able to play a key role post-Afghanistan”, the ministry says. 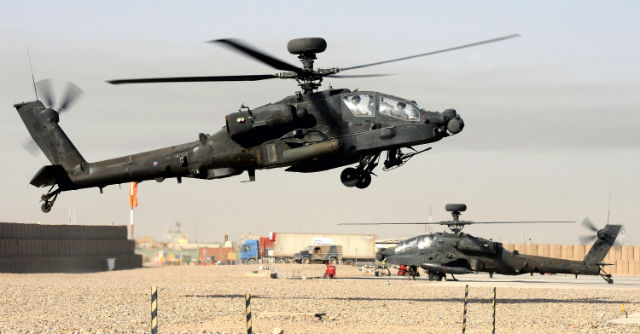 Flown by the Army Air Corps, the UK’s Apache fleet comprises 66 active examples, according to Ascend. Operated in Afghanistan since 2006, the model is close to having completed 150,000 flying hours, AgustaWestland says.

“The Apache IOS contract will deliver further efficiencies over the next five years, delivering the aircraft and capability the Army Air Corps require,” the company says.