MBDA has been awarded a contract by the UK Ministry of Defence for further development of its Spear 3 missile for use on the Lockheed Martin F-35B.

Worth some £411 million ($282 million), the four-year contract covers critical design and development work to integrate the missile into the internal weapons bay of the Joint Strike Fighter.

Spear 3 is derived from the company’s Brimstone precision-guided air-to-surface munition, currently used by the Royal Air Force on the Panavia Tornado GR4 operating over Syria and Iraq, and on the Eurofighter Typhoon from 2018. Spear 3 was successfully test fired from a Typhoon in March at a range in west Wales, the MoD says.

The new derivative benefits from replacing the missile's rocket motor with a turbojet engine, ensuring a range of some 60 miles, MBDA says; it is expected to enter service in the mid-2020s.

“This contract will give UK pilots a state-of-the-art British-designed weapon to be used on board our next-generation F-35B jets, with the precision and punch that we need to give decisive operational advantage over our adversaries and keep Britain safe,” says defence procurement minister Philip Dunne.

In March, company executives told media that the next development phase for Spear 3 could include a demonstration effort, but details of this have not yet been revealed. 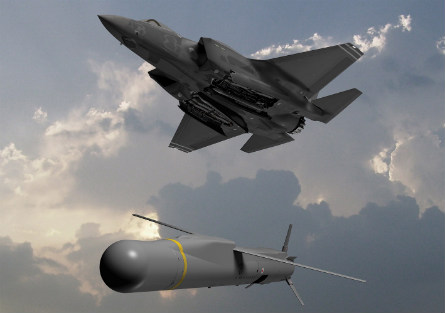 The contract follows an announcement earlier this month from MBDA that the next generation of Brimstone – benefiting from an improved seeker and increased stand-off range – had been tested aboard a Tornado during an operational assessment at China Lake in California.

Eleven flights were carried out, which marked a “major step” towards the weapon being granted its release to service with the RAF. It will initially be fielded on the Tornado, followed by the Typhoon.