The UK Civil Aviation Authority has moved the country a step closer to establishing a space launch industry geared to suborbital tourism and the launch of small satellites by narrowing the shortlist of possible locations for a spaceport originally named at the 2014 Farnborough air show.

Campbeltown, Glasgow Prestwick and Stornoway airports in Scotland, Newquay in England and Llanbedr in Wales have been deemed suitable, with RAF Leuchars a potential temporary facility. RAF Lossiemouth and Kinloss Barracks were ruled out for operational reasons. Key criteria include an existing or potential 3,000m (9,800ft) runway; the ability to accommodate dedicated segregated airspace; and a reasonable distance between the location and densely populated areas.

The plan announced at Farnborough included an agreement to collaborate with the US Federal Aviation Administration to share ideas about how to regulate private spaceflight, to ensure operations are safe without keeping companies Earth-bound with excessive regulation.

At that time, UK Space Agency chief David Parker stressed that no decisions had been taken as to whether or not a UK spaceport would enjoy any public subsidy. But in beginning to establish a regulatory programme and identifying possible sites for a spaceport, the UK was making it possible for entrepreneurs to push forward with efforts to provide low-cost access to space from UK territory.

Aviation minister Robert Goodwill added that the UK's goal is to command 10% of a global space business estimated to be worth some £400 billion ($686 billion) by 2030. Enabling more low-cost launches of small satellites – a UK industrial strength – is key to that strategy, he says.

Meanwhile, far more advanced US-based efforts have run into trouble. Virgin Galactic, long tipped to become the first private operator to take fare-paying passengers beyond the 100km legal boundary of space, remains grounded pending the National Transportation Safety Board investigation into the tragic test-flight crash at Mojave in October 2014, which killed one pilot and left a second critically injured. The accident ended hopes that the programme, already several years behind schedule, might get its air-launched, six-passenger rocket plane into space early in 2014.

At the same time, New Mexico state lawmakers are now considering legislation that would have the state seek a buyer for the spaceport that is planned to host Virgin Galactic’s operations. Spaceport America (pictured below), the runway and launch complex – with Norman Foster-designed terminal building – was completed in 2012 at a cost to New Mexico taxpayers of $219 million. The state hoped the facility, north of the White Sands Missile Range, would establish it as the leader in a nascent industry that some forecast could be worth billions of dollars annually.

Tenants are Virgin Galactic and SpaceX, and by late 2013 there had been 20 vertical launches at the site, for customers including Armadillo Aerospace, UP Aerospace, NASA, Moog-FTS and Lockheed Martin.

However, without expected revenue from Virgin Galactic operations, New Mexico’s lawmakers are also being asked to make up the shortfall by authorising an additional payment of nearly $1.8 million, which the spaceport describes as “an insurance policy” for the state’s $219 million investment. 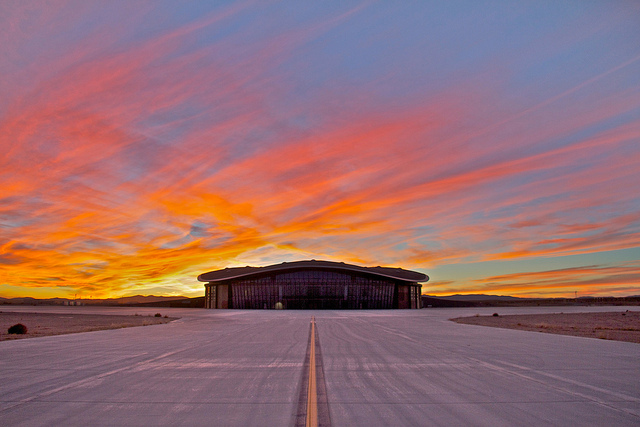